‘Never have I been so ashamed,’ veteran envoy in Geneva criticizes invasion

A Russian diplomat to the U.N. Office at Geneva says he handed in his resignation before sending a letter to foreign colleagues inveighing against Russia’s invasion of Ukraine.   © AP

DAVOS, Switzerland (AP) — A veteran Russian diplomat to the U.N. Office at Geneva says he handed in his resignation before sending out a scathing letter to foreign colleagues inveighing against the “aggressive war unleashed” by Russian President Vladimir Putin in Ukraine.

Boris Bondarev, 41, confirmed his resignation in a letter delivered Monday morning after a diplomatic official passed on his English-language statement to The Associated Press.

“For twenty years of my diplomatic career I have seen different turns of our foreign policy, but never have I been so ashamed of my country as on Feb. 24 of this year,” he wrote, alluding to the date of Russia’s invasion.

The resignation amounts to a rare — if not unprecedented — public admission of disgruntlement about Russia’s war in Ukraine among the Russian diplomatic corps. It comes at a time when Putin’s government has sought to crack down on dissent over the invasion and quell narratives that conflict with the Russian government’s line about how the “special military operation” — as it’s officially known in Russia — is proceeding.

“The aggressive war unleashed by Putin against Ukraine, and in fact against the entire Western world, is not only a crime against the Ukrainian people, but also, perhaps, the most serious crime against the people of Russia, with a bold letter Z crossing out all hopes and prospects for a prosperous and free society in our country,” Bondarev wrote, referring to the widespread use of the letter “Z” as a symbol of support for Russia’s war in Ukraine.

Reached by phone, Bondarev — a diplomatic counselor who has focused on Russia’s role in the Conference on Disarmament in Geneva after postings in places like Cambodia and Mongolia — confirmed he handed in his resignation in a letter addressed to Ambassador Gennady Gatilov.

A spokesman for the mission did not immediately respond to AP requests seeking comment.

“It is intolerable what my government is doing now,” Bondarev told the AP. “As a civil servant, I have to carry a share of responsibility for that. And I don’t want to do that.”

He told the AP that he had no plans to leave Geneva. Previously, he said he had expressed disapproval of the war to Russian colleagues.

“Some said, ‘Everybody disagrees, but we have to keep working’ while others replied ‘Shut up and stop spreading this bad influence- especially among younger diplomats,'” he recalled.

Asked if some colleagues felt the same, Bondarev said: “Not all Russian diplomats are warmongering. They are reasonable, but they have to keep their mouths shut.”

He suggested his case could become an example.

“If my case is prosecuted, then if other people want to follow, they would not,” Bondarev said.

Asked if he planned to defect, he chuckled and said, “I didn’t think so far” ahead.

In his English-language statement, which he said he emailed to about 40 diplomats and others, Bondarev said those who conceived the war “want only one thing — to remain in power forever, live in pompous tasteless palaces, sail on yachts comparable in tonnage and cost to the entire Russian Navy, enjoying unlimited power and complete impunity.”

He railed against the growing “lies and unprofessionalism” at Russia’s Foreign Ministry and took particular aim at Foreign Minister Sergey Lavrov.

“In 18 years, [Lavrov] went from a professional and educated intellectual … to a person who constantly broadcasts conflicting statements and threatens the world with nuclear weapons!” he wrote. “Today, the [Russian] Ministry of Foreign Affairs is not about diplomacy. It is all about warmongering, lies and hatred.”

“Bondarev should be invited to speak in Davos this week,” he added, referring to the World Economic Forum’s annual meeting in Davos, Switzerland. “The U.S., the U.K. and the [European Union] should lead the free world in creating a program to encourage more Russian diplomats to follow and defect, by providing protection, financial security and resettlement for diplomats and their families.”

In his email, Bondarev wrote that he should have resigned earlier, but didn’t because of “some unfinished family business” and because he needed to “gather my resolve.”

“It’s been already three months since my government launched a bloody assault on Ukraine and it’s been very hard to keep my mind more or less sane when all about were losing theirs,” he wrote.

Putin to seek support at Eurasian summit amid sanctions squeeze

Russian President Vladimir Putin chairs a meeting on May 20: His invasion of Ukraine has complicated life for Russia’s Central Asian partners.   © Sputnik via Reuters

ALMATY — A summit of a Russia-led free trade bloc that was already set to be tense because of the Ukraine war has been upended as most of the presidents, led by Vladimir Putin, declined to attend in person.

This Friday’s scheduled meeting of the heads of state of the Eurasian Economic Union (EAEU), a five-member trade group, is being hosted by Kyrgyzstan. But it will be a mostly virtual affair, as Russia’s leader along with Belarus’ Alexander Lukashenko and Armenia’s Nikol Pashinyan opted not to go to Bishkek.

From afar, Moscow is likely to try to bolster support from its closest allies amid global tensions over its brutal three-month war, and the hard-hitting sanctions led by Western powers. For some of the other members, the summit comes as they wrestle with discomfort over the Ukraine invasion, the dilemma of remaining tied to Russia economically and militarily, and the future of the EAEU itself.

“Moscow will likely seek to use the summit to corral EAEU members into being more overtly supportive,” Maximilian Hess, a fellow at the Foreign Policy Research Institute, told Nikkei Asia.

It is also a make-or-break moment for the long-term viability of the grouping, he said. Doubts only deepened in March when Russia introduced a temporary ban on exports of grain to the EAEU’s member states, undermining the barrier-free purpose of the bloc. The ban was lifted in April.

“The summit is likely to prove a litmus test for whether the union can ever become the kind of bloc that it was supposed to be, a vehicle for genuine economic integration and removing trade barriers,” Hess said.

The meeting coincides with the Eurasian Economic Forum starting Thursday. Kazakhstan President Kassym-Jomart Tokayev is expected to be the only leader from the union to go to Bishkek, where he will meet with Kyrgyzstan’s Sadyr Japarov. Uzbekistan, which has observer status but is not a member of the bloc, previously indicated that its President Shavkat Mirziyoyev would attend the summit.

Kazakhstan, which shares a 7,644 km border with Russia, is wary of annoying its aggressive northern neighbor. Ethnic Russians make up around 18% of Kazakhstan’s population, with many living in cities along the border. President Tokayev also owes Putin: In January, when violent unrest left more than 230 dead in the oil- and gas-rich Central Asian nation, he called on “peacekeepers” from the Russia-led Collective Security Treaty Organization (CSTO) to quell the protests. But this raised skepticism in Washington and elsewhere about the Kremlin’s true intentions in Kazakhstan.

The CSTO is a military alliance that, alongside Russia and Kazakhstan, also includes Armenia, Belarus, Kyrgyzstan and Tajikistan.

Since Russia invaded Ukraine on Feb. 24, Kazakhstan has tried to tread a cautious path. But it irked Moscow by refusing to support the Russian-backed proposed independence of Ukraine’s Donetsk and Luhansk regions and abstaining from a key United Nations vote condemning Moscow’s actions.

It also allowed a sizeable anti-war rally in March, where protesters denounced Putin as a fascist. Kazakhstan further angered Russia by canceling a military parade commemorating World War II in May. 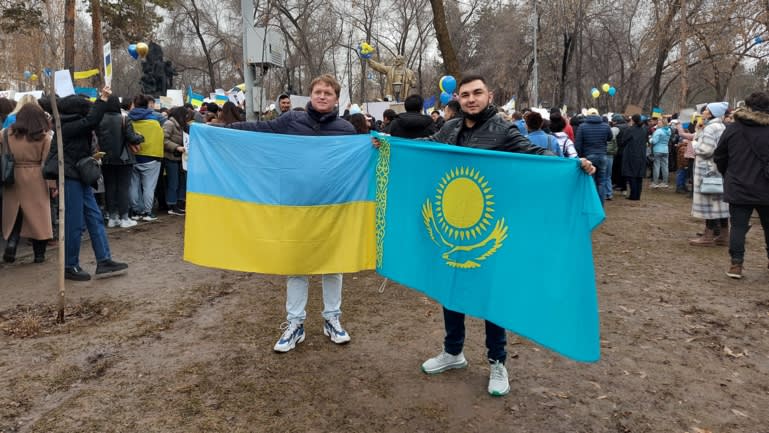 An anti-war rally shows support for Ukraine in Almaty, Kazakhstan, on March 6. (Photo by Paul Bartlett)

Hess thinks that Kazakhstan and Kyrgyzstan will be “hoping to get through the summit without too much fanfare” as they try to show a degree of support for Moscow while avoiding any moves that could be “seen as undermining Western-led sanctions on Russia,” he said. He cautioned that such moves could result in “real repercussions for their relations with Europe and the U.S.”

Kazakhstan has been careful to keep on the right side of Moscow and the sanctions but has experienced some fallout. The Russian pipeline it uses to export the bulk of its oil was closed for “repairs” for a month before reopening in late April, hitting its money-spinning exports of crude oil. Ostensibly, the operations were stopped by storm damage, though some critics speculated that Russia may have been in no rush to fix the facilities.

Kyrgyzstan is also wary of upsetting Moscow, as it is heavily reliant on remittances and trade with Russia. Kyrgyzstan will be looking to avoid any increased restrictions on the free movement of its migrants who work in Russia.

Kyrgyzstan’s President Japarov got into Russia’s bad books in April when he uttered the taboo word “war” to describe the conflict in Ukraine, rankling the Kremlin, which continues to refer to the invasion as a “special military operation.”

The semi-virtual Bishkek summit comes after a CSTO heads of state meeting on May 16 that saw Belarus president Lukashenko issue a bellicose call for unity among the members of the military alliance against the “hellish sanctions” imposed on his country — a stalwart supporter of the war — and Russia.

“Without a united front, the collective West will build up pressure on the post-Soviet space,” said Lukashenko, who allowed Russian troops to use his territory in the invasion.

The pressure will be on the Central Asian states to fall into line. But the grain export ban in March raised questions in Kazakhstan, for one, about the future of the union.

Veteran opposition politician, Bolat Abilov, who stepped away from politics in 2013, recently made a comeback in Kazakhstan and is planning to launch a party that will investigate leaving the trade bloc. Ryspek Sarsenbayev, an opposition activist, told Nikkei Asia in March that “this is a union that arrests Kazakhstan’s economic development and makes it politically dependent” on Russia.

But despite the existential problems facing the union over the continuing conflict in Ukraine and the knock-on effects of the sanctions, Kazakhstan’s exit remains a distant possibility.

“I think that it is very unlikely that Kazakhstan leaves the union anytime soon,” Hess concluded.