Where People Are Most Vulnerable to the Delta Variant

The patchwork nature of the coronavirus vaccination campaign in the United States has left people in many parts of the country still vulnerable to the virus and the fast-spreading Delta variant. Even areas with high vaccine uptake or those that were hit hard in previous waves of the pandemic could see new outbreaks if vaccination rates do not increase, an analysis conducted for The New York Times shows.

Estimates developed by PHICOR, a public health research group, suggest that more than 40 percent of U.S. residents may not be sufficiently protected against the Delta variant.

Share of people vulnerable to infection with the Delta variant

Some of the least-protected areas, like counties in southern Missouri and northern Arkansas, are currently facing large outbreaks. In Taney County, Mo., where only 28 percent of residents are fully vaccinated, the average number of daily reported cases is higher than ever, and hospitals in the area are seeing a surge of Covid-19 patients.

In other areas of the country, vaccination rates are as high as 70 to 80 percent. But researchers say it is likely that few if any counties have reached herd immunity — or the point at which enough people are immune that the virus is unlikely to spread within the community. Because the Delta variant is more contagious, that threshold is higher than before.

That means much of the country is still susceptible to the kind of rapid spread that can put stress on hospitals and lead to worse outcomes for patients. The best protection for every community, experts say, is to continue to vaccinate as many people as possible.

“Small increases in vaccination coverage can make a significant difference in terms of cutting down the number of cases” overall, said Bruce Y. Lee, a professor at the City University of New York who leads the PHICOR research effort. “If you get higher in terms of immunity, it can slow down the virus.”

To arrive at a risk level for each county, PHICOR researchers adjusted national estimates of Covid underreporting to approximate the true number of cases in each county. That totals about 128 million cases nationally — nearly four times the number of reported cases.

The researchers combined those case estimates with vaccination rates in each county and adjusted the figures to account for Delta’s ability to evade natural defenses. The result is an estimate of the total number of people in each county with immunity to the virus, and an estimate of those who are still susceptible to infection. These estimates were developed before the release of an internal C.D.C. report raising the possibility that fully vaccinated people who contract the Delta variant could spread the virus as easily as unvaccinated people.

Even areas with high vaccination rates might still have pockets of vulnerability. And in all counties, children under the age of 12 are not eligible to be vaccinated, making it easy for the disease to continue to spread as children return to school.

Take New York City, for example, where 54 percent of residents are vaccinated citywide but there are large differences in vaccination rates among neighborhoods. 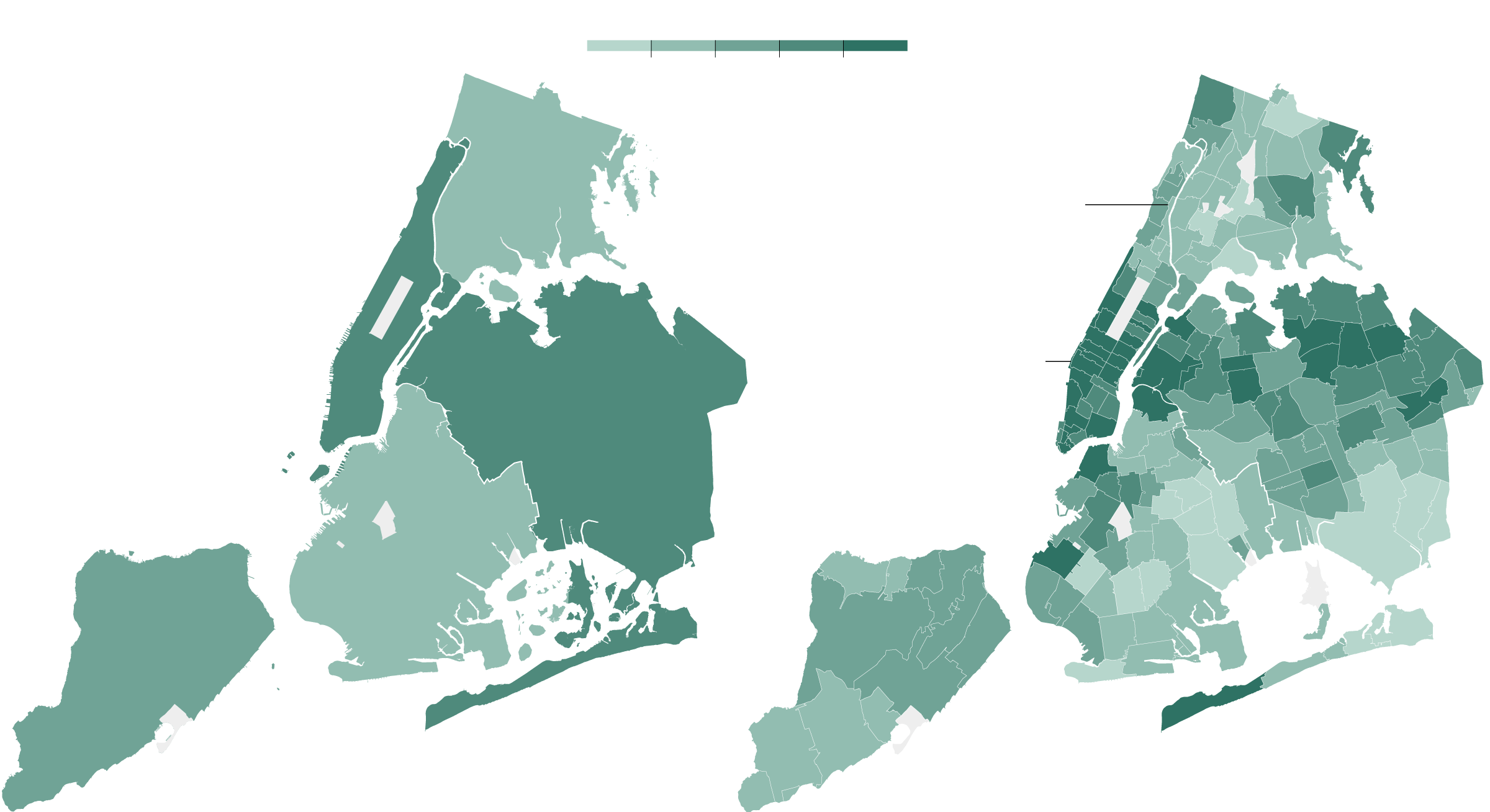 have vaccination rates as

PHICOR is one of several research groups attempting to model the trajectory of the pandemic and where the virus might spread next. Jeffrey Shaman, an epidemiologist at Columbia University, leads a research group that has produced its own estimates and found fewer vulnerable people than PHICOR overall.

Dr. Shaman’s model showed broadly similar regional patterns, though measures of vulnerability varied by county because of the different methodology his team used. Overall, he agreed that most of the country remains vulnerable to the Delta variant, though he noted that some areas are more at risk of a large outbreak than others.

“The areas with the higher susceptible pools will grow at a faster rate,” Dr. Shaman said. “You’ll see a greater explosion of cases, it will peak at a higher number, and the overall number of people infected will be larger.”

Forecasts compiled by the C.D.C. on average project that the number of new cases and deaths will continue to rise in the coming weeks now that Delta is the dominant form of the virus in the United States. That may mean a return to preventative measures like mask wearing for vaccinated people in some areas, given the uncertainty about breakthrough infections.

“In communities where we are starting to see real concerning surges in hospitalizations and cases, even vaccinated people need to be doing their part to slow transmission in the community as a whole,” said Lauren Ancel Meyers, an epidemiologist at the University of Texas at Austin and director of the U.T. Covid-19 Modeling Consortium.

There are some positive signs: A majority of adults over 65 have been vaccinated in most counties, offering strong protection against the worst outcomes for one of the most at-risk groups. And despite the recent rise in cases, the number of new Covid deaths has remained low.

But the pace of vaccination has slowed by more than 80 percent since its peak in April, and more than half of people in the United States live in counties where most people remain unvaccinated.

Although breakthrough infections are rare, experts say vaccinated people living around large unvaccinated populations may be more susceptible to these infections because they are more likely to encounter the virus in the event of an outbreak.

“Every time you go out, there’s a chance that you might encounter someone who is not vaccinated and possibly infected with the virus,” Dr. Meyers said. “The more people who are vaccinated, the less likely that becomes.”

The disparate levels of defense across the country pose a further challenge to controlling the pandemic. “If you have the virus still locally circulating in certain areas, it raises the probability of another variant emerging,” Dr. Lee said.

The model makes several assumptions about the nature of the virus, reported data and vaccination. First, it assumes that natural immunity continues to offer the same level of protection over time to everyone who has recovered from infection. What percentage of people who have recovered from infections become immune and how long immunity may last are still open questions, but evidence suggests that immunity from prior infection alone is likely to last for at least eight months.

The model also assumes that the probability of a person being vaccinated is the same for people with and without natural immunity. In other words, having recovered from infection does not make a person any more or less likely to take the vaccine.

Finally, the model assumes that both natural and vaccine immunity are imperfect. It adjusts vaccine immunity according to the efficacy of each brand of vaccine and applies those values according to each brand’s usage rates by state. The model assumes that natural immunity is 47 percent effective at preventing infection with the Delta variant, based on the results of laboratory studies.

Estimates for Georgia, Hawaii, Vermont, Virginia, West Virginia, and some counties in Alaska and California are unavailable because of insufficient vaccination data.