‘Now I’m going to have to marry her!’: Miami condo resident reveals he only survived because his girlfriend persuaded him to stay with her on night it collapsed – and says he now has to buy her an engagement ring

By RACHEL SHARP FOR DAILYMAIL.COM and REUTERS

A resident of the collapsed Miami condo has revealed he only survived the tragedy because his girlfriend persuaded him to stay at her place on the night the building fell and said he would repay her by buying her an engagement ring.

Erick de Moura, 40, said he was supposed to be staying at his two-bedroom apartment on the 10th floor of Champlain Towers South on June 23 but by a ‘miracle’ he wound up spending the night at Fernanda Figueiredo’s home less than two miles away.

In the early hours of June 24, Champlain Towers South collapsed, killing at least 16 while 147 are still missing almost one week on from the tragedy.

De Moura told how he woke up that morning to several messages and notifications revealing what had happened.

‘We are glad to be alive,’ de Moura said. 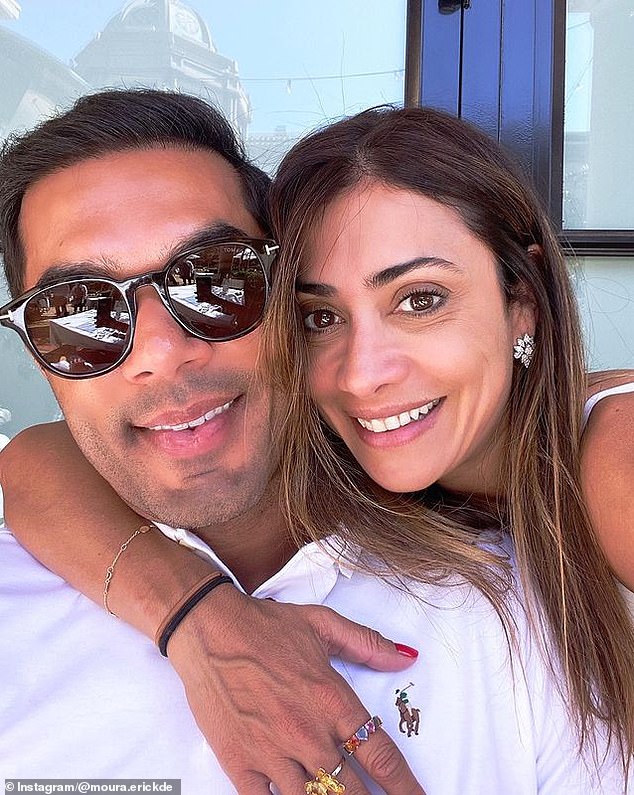 A resident of the collapsed Miami condo has revealed he only survived the tragedy because his girlfriend persuaded him to stay at her place on the night the building fell. Erick de Moura with girlfriend Fernanda Figueiredo 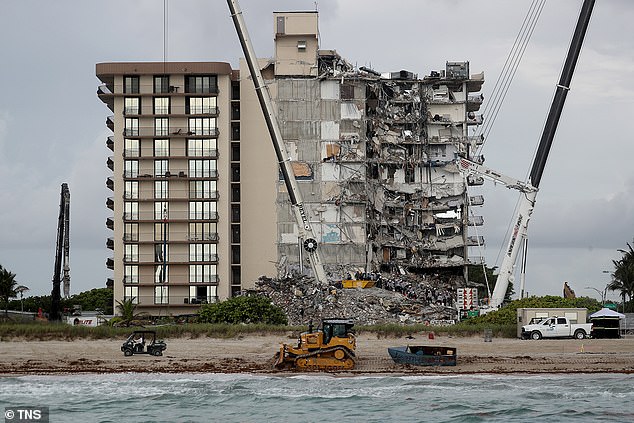 The 40-year-old Brazil native told Reuters he had woke up Wednesday morning and one to the gym.

He then spent the rest of the day working and cooking a traditional Brazilian dish in his apartment for his girlfriend.

He then took the dish over to her Miami Beach house for a meal with her and some friends that evening.

After dinner, he said the group watched the Copa America soccer match between Brazil and Colombia before playing a pickup game outside.

De Moura was in his girlfriend’s driveway dripping wet after retrieving their ball from a nearby waterway and planned to head home.

‘I said, “I’m going to go home because I’m going to the gym tomorrow morning and I have nothing to wear here,”‘ he said.

‘I was saying goodbye and she said “Why don’t you stay?”‘

De Moura told CNN it was very rare for him to stay at his girlfriend’s on a Wednesday night. 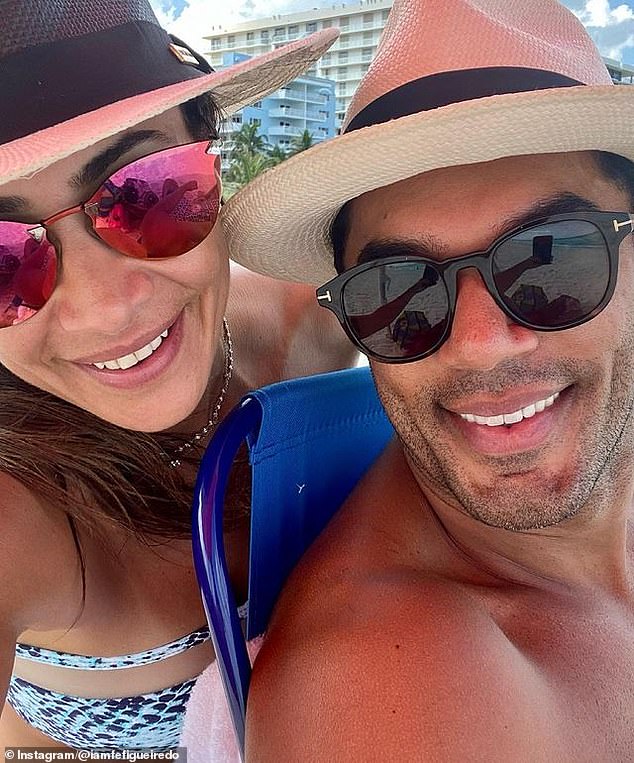 He revealed that Figueiredo did not have one of her children at home that night so she ‘kept insisting for me to stay’ so they could spend some quality time together.

Figueiredo convinced him not to return to Champlain Towers, telling him she would dry his shorts and ordering him to take a shower.

The couple sat and drank a beer and went to sleep right around the time the 130-unit condo building collapsed at 1:30am Thursday morning.

De Moura told Reuters he woke hours later to a missed call and a text from a woman who works at the Towers, asking if he was alright.

He spoke of the horror when he learned what had happened.

‘I had goose bumps. My heart was pounding. I got dressed and rushed to the building,’ he said.

De Moura described the night’s events as a ‘miracle’ that saved his life.

‘Only by God. To me this is a miracle,’ he said, adding that he has thanked his girlfriend and now has to buy her an engagement ring.

While the 40-year-old, who sells medical equipment for a living, said he feels lucky to be alive he said he was in ‘disbelief’ at what had happened to the people he passed every day in his building. 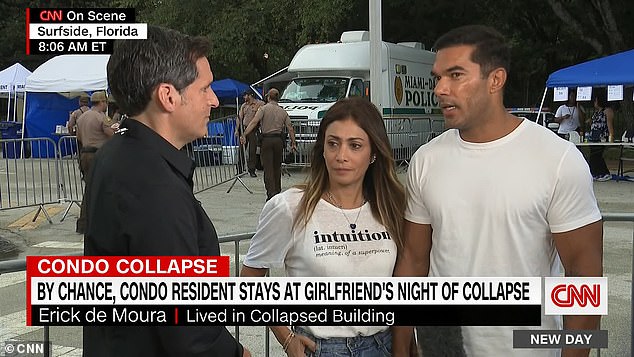 De Moura told CNN it was very rare for him to stay at his girlfriend’s on a Wednesday nighthttps://www.youtube-nocookie.com/embed/QUz1MSqiVkA

‘It’s very tough to get in touch with my emotions right now.’

He described the condo building as a friendly place where residents came from all corners of the globe to make their homes in the US.

‘We saw each other in the elevator. Sometimes helped carry a box,’ he said.

‘These people are dead. For us, on the other side, we are glad to be alive.’

De Moura said his girlfriend was ‘crying all of the time’ as they try to process what happened.

‘I haven’t cried yet. She is crying all of the time,’ he said.

‘It’s disbelief. It’s very difficult to understand what is happening.’

Figueiredo choked back tears as she told CNN Tuesday she could not understand how the 1980s condo tower could have collapsed suddenly.

‘It’s so unreal that a building like this’ could collapse, she said. 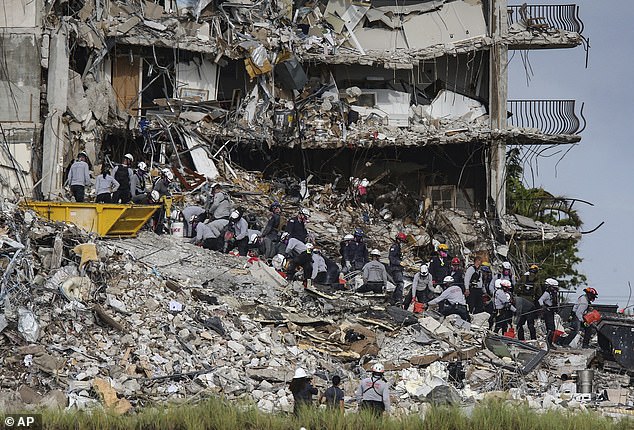 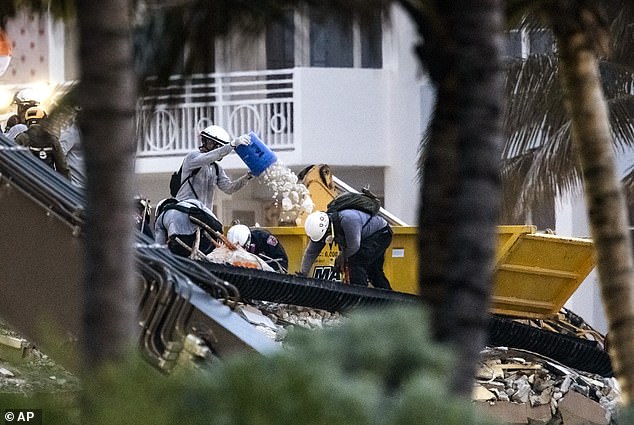 ‘He could (have been) there a few hours before.’

De Moura is currently staying at a hotel with other surviving residents as the hunt for victims and survivors in the rubble enters its seventh day Wednesday.

A total of 149 people remain unaccounted for almost one week on from the collapse as hopes of finding anyone else alive increasingly fade.

The Commander of the Israeli National Rescue Unit told CNN early Wednesday that the bodies of more victims were found overnight Tuesday after finding and digging new tunnels in the rubble.

The search has been hampered by numerous challenging factors including the threat of falling debris, heavy rain and wind, and the discovery of deep fires in the rubble over the weekend.

While the search continues, questions continue to mount over what caused the collapse and whether critical failures by building officials left residents in the dangerous tower ahead of its collapse. 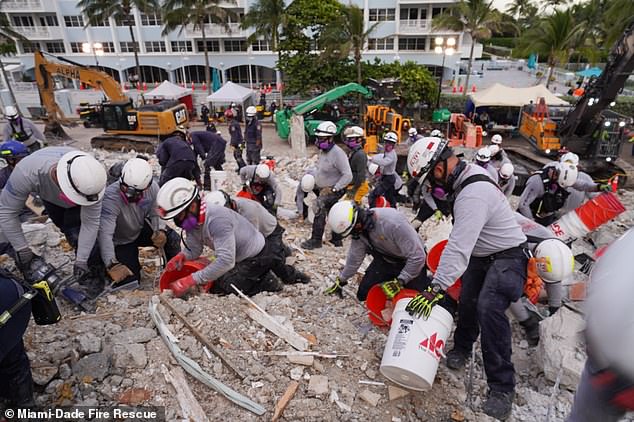 In the early hours of June 24, Champlain Towers South collapsed, killing at least 16 while 147 are still missing almost one week on from the tragedy 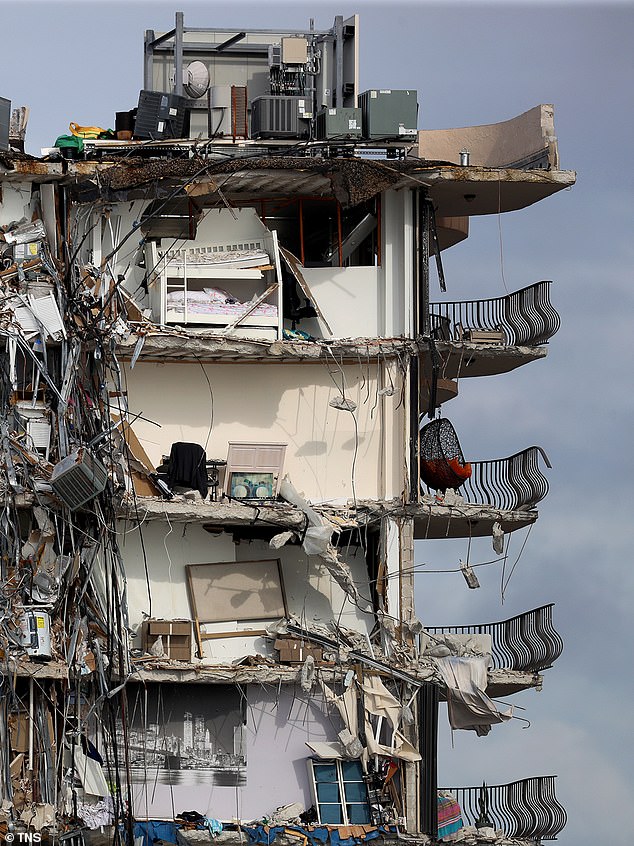 An alarming 2018 structural survey warned of ‘major structural damage’ in the building specifically to the pool area and underground parking garage.

On Tuesday, just 36 hours before the collapse, a contractor photographed worrying signs of damage in the parking garage.

The 1981 building was coming up for recertification – a process which is required every 40 years for buildings in Miami Dade.

Fears are now growing over the safety of other buildings in the county.

Miami Dade County officials said they are inspecting 501 buildings that is 40 years or older to make sure none are compromised like Champlain Towers South.