This is a spectacular account of the events leading up to and through the Allied Forces’ invasion of Normandy, France on D-Day (June 6), 1944 to fight the occupying Germans.  The film is particularly interesting because it looks at D-Day through the eyes of all of the participants, including the Germans, who are overwhelmed by the forces brought against them.  It is in fact a German officer who gives the story its title — when he views the approaching Allied armada, he says, “This will be the longest day.”

Honoured on the soil they freed: It has taken 77 years – but finally, soaring above the Normandy beaches, British warriors have a magnificent memorial in northern France. ROBERT HARDMAN salutes the stories of sacrifice that inspired the campaign

By ROBERT HARDMAN FOR THE DAILY MAIL

This time exactly 77 years ago, they were nervously waiting to board their ships, planes, gliders and landing craft. Some were terrified, a few were excited, most just wanted to get it over with. But they all did their duty. And more than 24,000 of them never came home.

Yet it has taken all this time for Britain’s Normandy heroes to be honoured with a proper, national memorial in the place where they fell.

However, at long last, their surviving comrades and all their loved ones can rest assured that this country has finally done the decent thing. 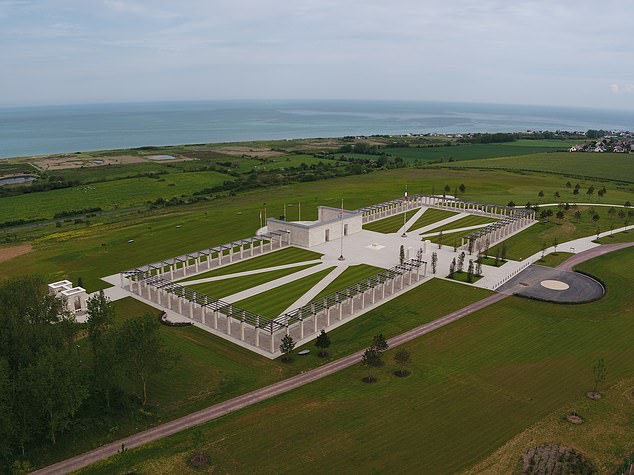 It has taken 77 years for Britain’s Normandy heroes to be honoured with a proper, national memorial in the place where they fell

Because this weekend, on the anniversary of D-Day itself, the Normandy Memorial to all the British servicemen and women killed in the greatest assault in our history will be unveiled. True, this wretched pandemic means that none of the veterans can be there on the beaches to see the proper royal unveiling which had been planned.

But dozens of them will be gathered at the National Memorial Arboretum in Staffordshire, along with hundreds of relatives whose loved ones are engraved on these immaculate stone columns, their names all listed under the date they fell during that pivotal summer of 1944.

They will be greeted by a special video message from the Prince of Wales, royal patron of the appeal. They will then watch a live video link by satellite as the British ambassador, Lord Llewellyn, formally unveils the memorial above the sands at Ver-sur-Mer.

And since no one else can be there, the Mail is proud to offer this exclusive preview of the site. Because it is in no small part down to our outstanding readers that this spectacular memorial — laid out like the Union flag — came about in the first place. 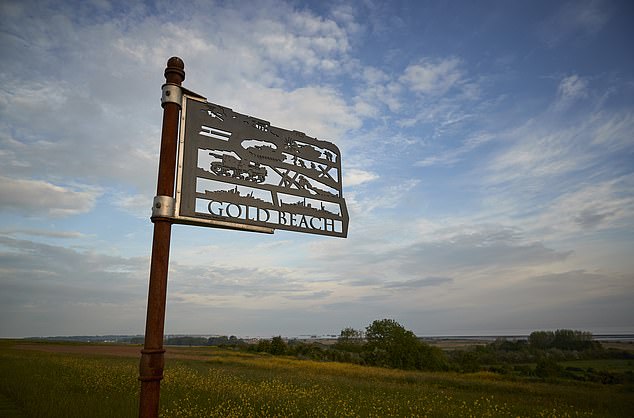 This weekend, on the anniversary of D-Day itself, the Normandy Memorial to all the British servicemen and women killed in the greatest assault in our history will be unveiledNew British memorial prepares for 77th Anniversary of D-Day landingsLoaded: 0%Progress: 0%0:00PreviousPlaySkipMuteCurrent Time0:00/Duration Time2:39FullscreenNeed Text

Not only did Mail readers raise more than £1 million towards this project but your passion and your powerful messages ensured that the Chancellor’s LIBOR fund — the penalty pot for errant banks — agreed to come up with the lion’s share.

All the other allied nations who took part in D-Day, including the Americans, Canadians and French, have long had a national memorial on the soil they liberated. As of this weekend, the nation which sent more men and machinery into the hell of Normandy than any other, will finally have one too.

Last night, George Batts, 95, the former secretary of the Normandy Veterans Association and one of the founding fathers of this project, reiterated his gratitude to all those Mail readers who played their part. ‘You have all helped make this dream come true for a lot of us who never thought it could happen,’ he tells me from his home in Kent.

Indeed, your generosity is formally recognised for evermore since it is carved into these limestone pillars, alongside the names of the other principal donors, including the Michael and Sarah Spencer Foundation of philanthropist Lord Spencer of Alresford. 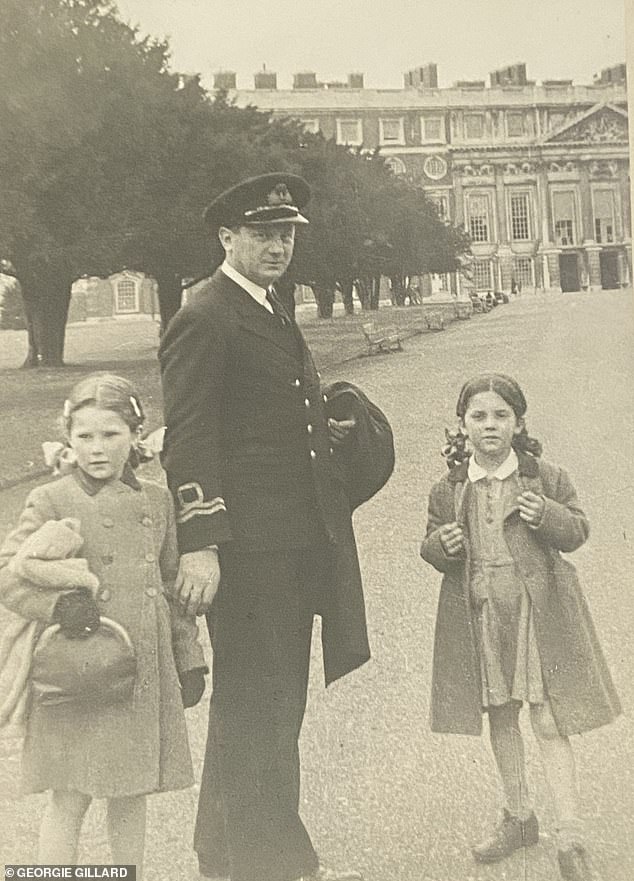 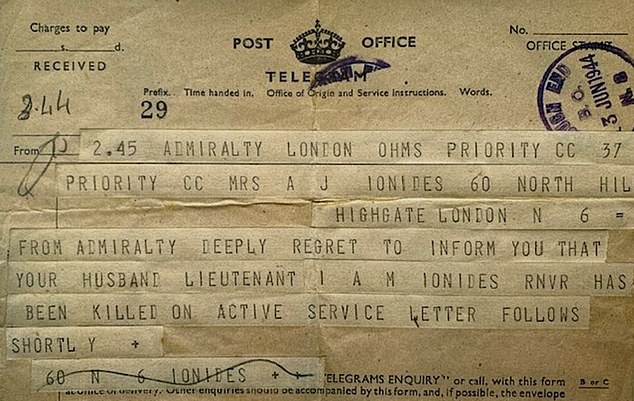 A former Royal Engineer, who spent D-Day and the following week crawling over Gold Beach clearing landmines, Mr Batts is keen to point out that while all the veterans are delighted to see this thing finally take shape, it is not about them. ‘It’s about those poor devils we left behind.’

These events might have happened 77 years ago but they are still etched in the mind of Anthea Ionides, as surely as the name of her father is now engraved on the memorial: Lt Theo Ionides.

‘Some of us are still living with the consequences,’ says the sprightly retired schoolteacher from her home in Hampstead, North London. Her father was an Oxford-educated engineer who had been just old enough to serve in World War I and was just young enough to serve in Naval Intelligence during the Second.

He worked on mine disposal in the very same Admiralty office as James Bond creator, Ian Fleming. Ahead of D-Day, Lt Ionides was part of a British commando unit which landed in the American sector, heading for Cherbourg, and was killed near St Mere Eglise four days after D-Day.

‘I was nine when I came home from school and my mother got the telegram which changed our lives,’ says Anthea, who cherishes a photograph of a family day out at Hampton Court. 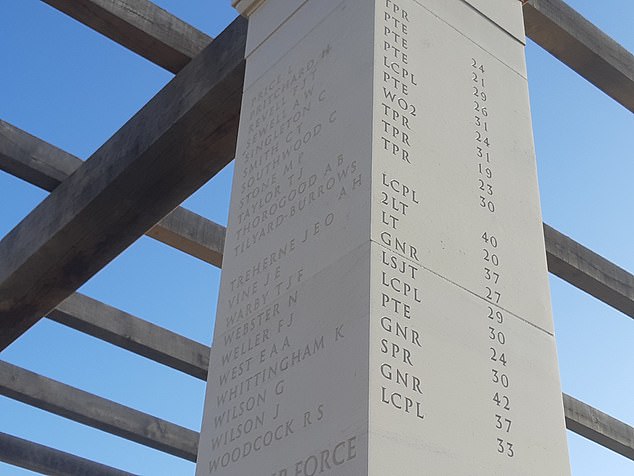 ‘My memory of my father is that he was just great fun. My mother was the sensible one with a sensible job and he was always off on secret assignments.’

Her father is buried in the Commonwealth cemetery at Bayeux and when her son, called Theo in his honour, was killed in a car crash at the age of 22, she placed his ashes at the same spot. She has the name Theo tattooed on each shoulder.

For her, the unveiling of this memorial is long overdue, intensely emotional and deeply appreciated.

‘I love going back to Normandy and meeting all the veterans and they always say: “It’s your Dad we’re here for.” It always makes me cry.’ 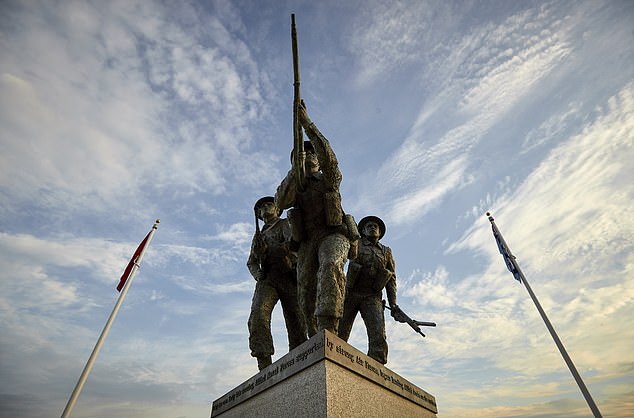 To all those who have donated, Anthea has a simple message: ‘It’s just the most enormous thank you.’

So says Tom Warby Clitherow, a retired leisure centre executive from Chorley, Lancashire. He will be at the arboretum on Sunday in memory of the father he never knew. Tom was 15 months old when his father, Gunner Thomas Warby of the Royal Artillery, was killed by enemy mortar fire at Herouvillette in July 1944. He is a reminder that the worst British losses were not sustained on the beaches but in the murderous Battle of Normandy which raged on through the countryside and around the city of Caen until the end of August 1944.

‘I grew up knowing that my father held me in his arms when I was 12 months old when he was last at home on leave,’ says Tom. ‘And we have a photograph of him at the time in the garden at home. My mother sent it to him and it came back, with all his possessions, with damage from the mortar fire.’ 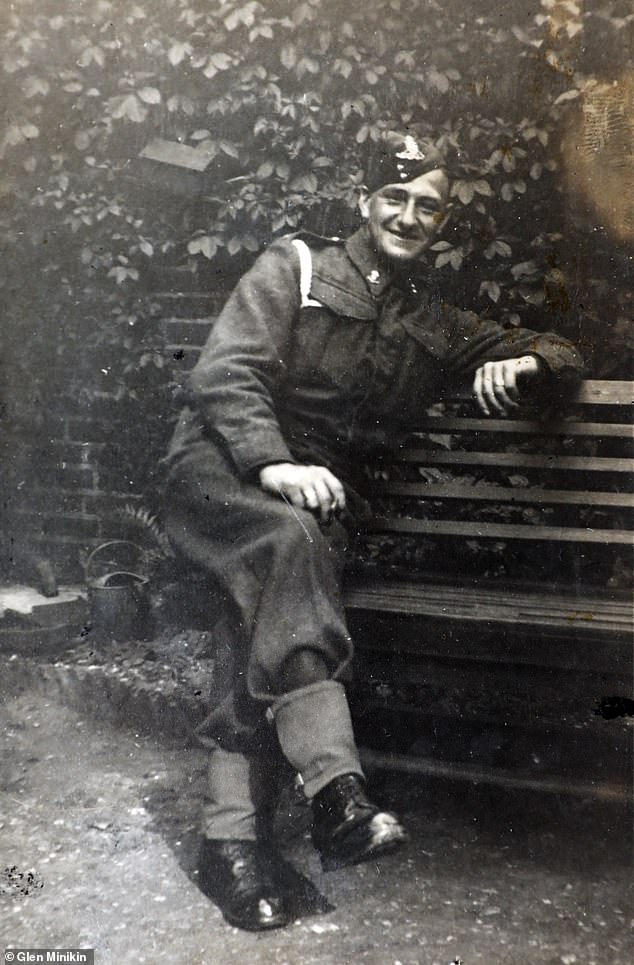 Thomas James Frederick War served in the D-Day landings but died on July 27, 1944

Over the years, Tom has made friends with a local French family who regularly visit his father’s grave on his behalf and like to stay in touch. For him, that goes to the heart of this memorial: ‘These men died so that Europe could be free.’

Like more and more people, he has signed up to be a ‘guardian’ of the memorial, making monthly donations which will not just ensure it remains in good condition but will help it raise funds for the next big project. ‘We badly need an education centre,’ says George Batts. ‘Schoolchildren are going to be visiting this memorial long after we’re all gone and we need them all to understand.’

For now, though, I think Mr Batts and his fellow-veterans should take a modest bow and enjoy the sight of their magnificent handiwork. Overdue it may be. But let no one say they have not done their 22,442 fallen comrades justice.