TOKYO — Human rights now hold great sway over consumer and investor behavior, putting pressure on major brands to avoid materials from problematic regions. This in turn has translated into fresh volatility in certain corners of the commodities market.

Among the most prominent examples is cotton.

Cotton price trends in the U.S. and China have diverged amid concerns about forced labor and other abuses against Uyghur Muslims in Xinjiang, China’s largest source of the material by far. Businesses have been shunning Chinese cotton, particularly after Washington began restricting imports of products made with Xinjiang labor in the latter half of last year.

As big-name brands such as H&M and Nike move away from Chinese cotton, expectations of a broader global shift have put downward pressure on prices.

Benchmark futures for U.S. cotton listed in New York are trading around 90 cents per pound, while futures on the Zhengzhou Commodity Exchange — which cover higher-quality material mainly of Chinese origin — have hovered around the equivalent of about $1.02 a pound. 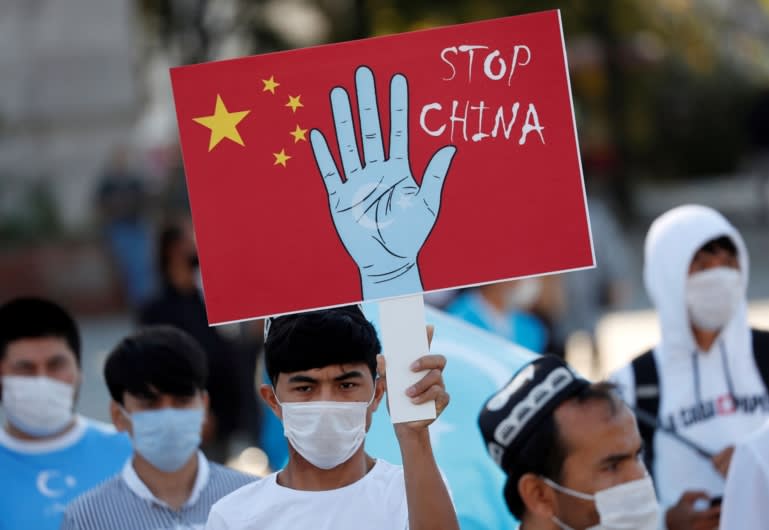 China was the world’s second-largest producer of cotton behind only India during the fiscal year ended July 2020, according to the U.S. Department of Agriculture. About 80% of Chinese cotton comes from Xinjiang, and the region has a high concentration of spinning mills and garment factories.

“Companies are starting to establish cotton supply chains that bypass China,” said a representative at a specialty trading house.

Gems are the big concern in Myanmar, a major producer of valuable stones. The country is known particularly for jade and top-quality “pigeon blood” rubies that can sell for tens of millions of dollars at auction.

Global brands are steering clear. American jeweler Tiffany & Co. says on its website that it does not source rubies from Myanmar, citing “concerns about ongoing human rights violations and a lack of transparency,” and has not done so since an earlier U.S. ban on imports from the country in 2003. A block of jade is inspected at a gem emporium in Yangon.   © Reuters

Companies that buy rubies “have shifted away from Myanmar,” with its human rights problems, “to Mozambique, which has a stable supply,” said Nobuyuki Harada, president of Jewelry Advisor and Gallery in Japan.

Myanmar had faced international criticism for years for funneling massive profits from the gemstone trade to the military through state-run enterprises. The U.S. has periodically targeted the industry with sanctions since the 2000s, and has done so again after the February coup, barring state-owned companies in the field from doing business with American companies.

“We are sending a clear signal to the military that the United States will keep increasing pressure on the regime’s revenue streams until it ceases its violence, releases all those unjustly detained, lifts martial law and the nationwide state of emergency, removes telecommunications restrictions, and restores Burma to the path of democracy,” U.S. Secretary of State Antony Blinken said earlier this month in a statement announcing sanctions on Myanma Gems Enterprise.

Surging demand for cobalt, used in electric-vehicle batteries, has also raised human rights concerns. Most of the world’s supply of the metal is mined in the Democratic Republic of the Congo, where the industry has been condemned for its use of child labor. Battery and auto manufacturers are working on alternative battery designs that do not require cobalt.