A Chinese company has lodged a proposal to build a $39billion city on Australia’s doorstep, in a move that’s likely to make Australian national security analysts nervous.

The plan revealed in leaked documents would see a shining new city constructed on the Island of Daru in Papua New Guinea – just 200km north of Australia’s Cape York in the Torres Strait.

The Beijing-backed Hong Kong registered company, WYW Holding Limited, are behind the scheme which was submitted to the PNG government in April last year.

If approved, ‘New Daru City’ would include a major sea port, an industrial zone as well as a commercial business precinct.

The 100km square development project would also house a resort for tourists and vast residential areas. 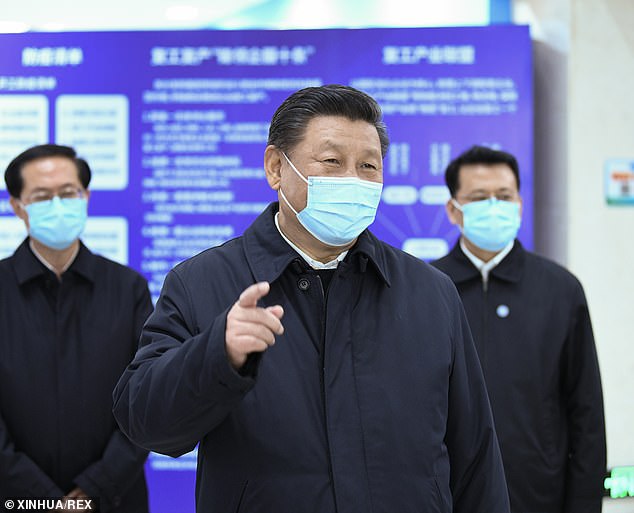 It comes after the Fujian Zhonghong Fishery Company, which is controlled by the Chinese government, recently inked a Memorandum of Understanding with the PNG government to build a $204million fishery complex in Daru – an area of PNG which has no commercial fisheries.

Under the proposal for New Daru City, the potential deal would be ‘predicted on an agreed Sovereign Guarantee based on a long-term BOT [Build Operate Transfer] contract’.

This means the Communist Party-backed firm would have total ownership of the venture for a designated period of time yet to be determined.

Over the past year Australia has become the target of an increasingly aggressive and belligerent Beijing.

China imposed a litany of unofficial bans and arbitrary tariffs on billions of dollars worth of Australia exports after Canberra called for an inquiry into the origin of the coronvirus pandemic – and the subsequent cover-ups which followed.

Five of Australia’s top beef distributors were hit with blanket bans along with cotton, timbre, seafood and coal producers.

The wine industry Down Under was hit with a crippling 212 per cent tariff – contravening the two nation’s 2015 Free Trade agreement – while barely growers also had an 80 per cent barrier slapped on exports.

Australia is now preparing to take legal action against China at a World Trade Organisation tribunal, but the process to have the tariffs removed could take several years.

As Beijing now looks to set up a mega city in Australia’s backyard with the diplomatic relationship continuing to deteriorate, it’s feared China could have an ulterior motives and a secret plan to turn the area into a naval base. 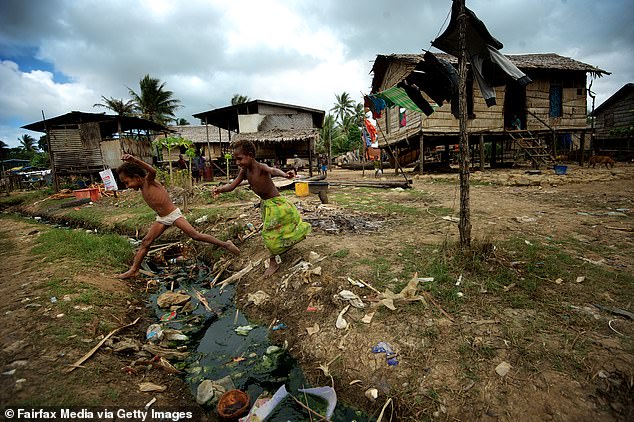 Under the proposal for New Daru City, the Communist Party-backed firm would have total ownership of the venture for a designated period of time. Pictured: Children jump over a dirty drain on the PNG island of Daru 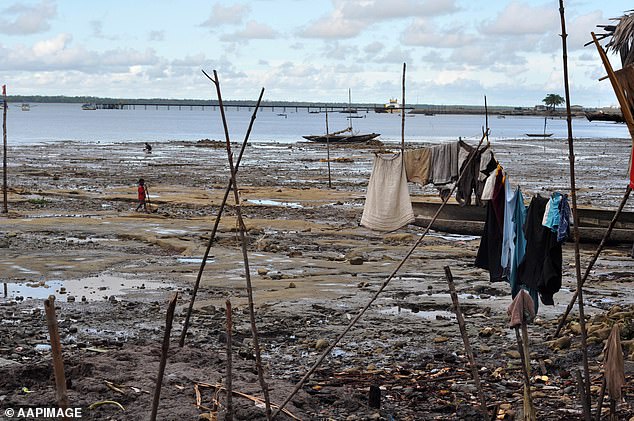 WYW Holding Limited said in the documents they had already began ‘preliminary discussions with representatives of Western Province’.

But any plans to build such and ambitious project would be met with immense difficulty.

Daru, with a population of about 20,000 is currently in the midst of tuberculosis epidemic and the region is critically underdeveloped.

Michael Shoebridge, the national security program director of the Australian Strategic Policy Institute’s said China and it’s corporate proxies often approach provincial governments to try and get controversial infrastructure projects off the ground – as they are less security conscious than national administrations.

The authoritarian regime tried a similar move in Australia when Victorian Premier Danial Andrews signed a Memorandum of Understanding on the Belt and Road Initiative – a decision which was later overruled by the federal government on the grounds of national security concerns.

‘The big message is really that Australian policymakers and leadership cannot be complacent in any way about Chinese presence and intent in PNG,’ he told The Australian.

‘Chinese entities and actors are demonstrating that they are opportunistic and entrepreneurial, and the environment is a reasonably permissive one for that kind of behaviour.’ 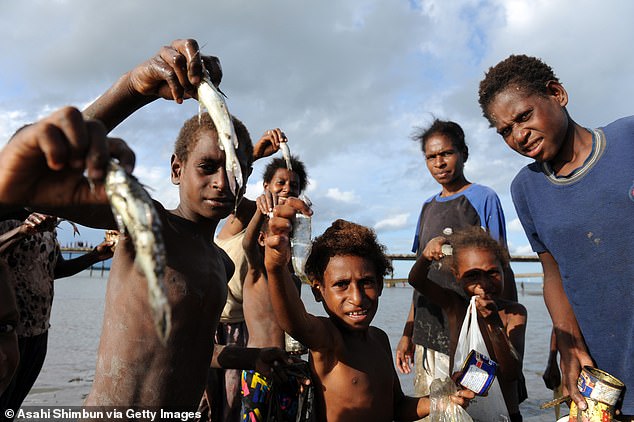 Daru, with a population of about 20,000 is currently in the midst of tuberculosis epidemic and the region is critically underdeveloped. Children in Daru hold up fish to the camera 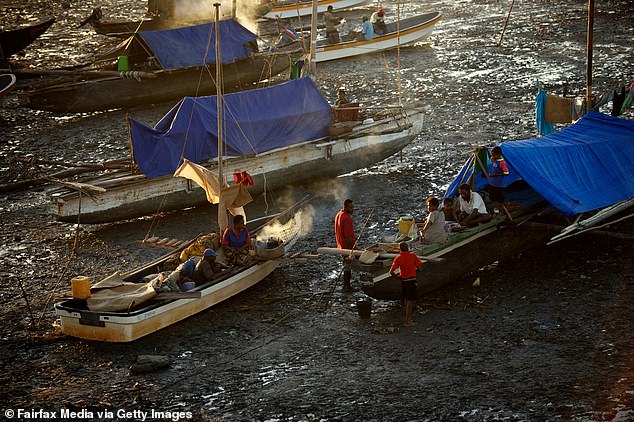 The proposal for New Daru City comes after the Fujian Zhonghong Fishery Company, which is controlled by the Chinese government, recently inked a Memorandum of Understanding with the PNG government to build a $204million fishery complex in Daru. Pictured: Fishing boats in DaruChina accuses Australia of ‘weaponising national security’

The global infrastructure scheme launched in 2013 hands out huge loans to impoverished nations already laden with debt in expectation of support for its strategic objectives.

International observers have described the initiative as ‘debt-trap diplomacy’.

In the case of PNG, the cost of building New Daru City would be $5billion above the entire nation’s annual GDP.

Nations on Australia’s doorstep in the South Pacific region have been a central focus of China.

‘Our research shows that the small and fragile economies of the Pacific are among the most vulnerable to potential debt problems, while several Pacific countries already appear to be among those most heavily indebted to China anywhere in the world,’ analysts from the Lowy Institute’s Pacific Islands Program wrote.

‘Our analysis suggests that China’s lending practices in the Pacific have not been so problematic as to justify accusations of debt trap diplomacy – at least not yet.’ 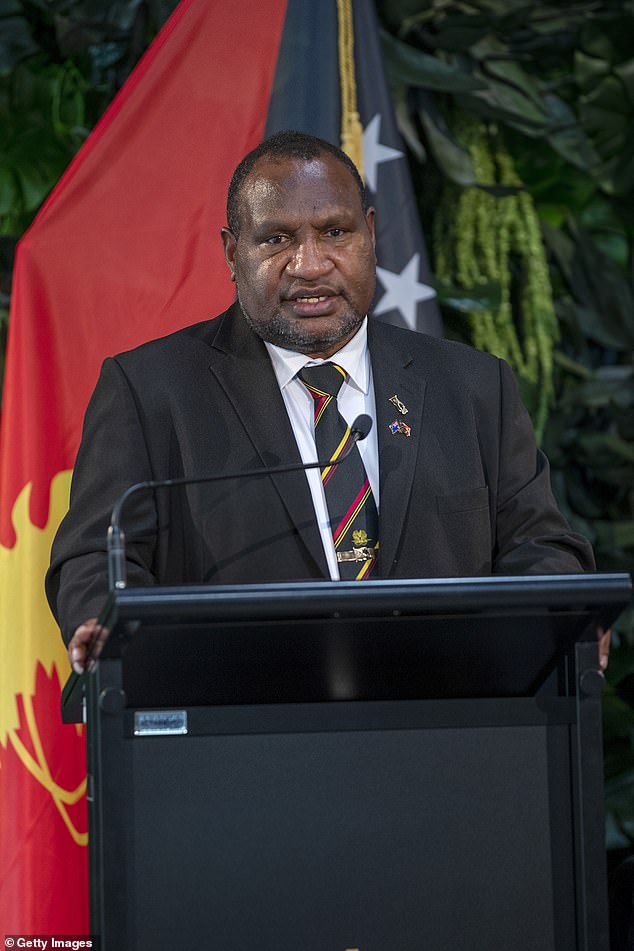 The Prime Minister of PNG, James Marape (pictured), has played coy about the proposed deal, claiming he is ‘unaware’ of the project.

But Mr Pryke said ‘the sheer scale of lending, combined with inadequate controls’ will make it difficult to avoid ‘potentially unsustainable loans’.

Australia’s northern neighbor – the Solomon Islands – joined the Belt and Road Initiative after switching its diplomatic allegiance from Taiwan in 2019.

A report by the ABC in February 2020 revealed the nation was also in discussions with a Chinese businessman for a $151billion dollar loan – and amount 77 times the country’s annual GDP.

The Prime Minister of PNG, James Marape, has played coy about the proposed deal, claiming he is ‘unaware’ of the project.

But his spokesperson said PNG would not stand in the way of beneficial foreign investment.

‘If a foreign investor wants to come to PNG with multimillion Kina investments, PNG will not stop them, on condition that all our laws are complied with and local Papua New Guineans benefit from these types of projects,’ the spokesman said.