Let us in, Joe! Caravan of 1,000 Honduran migrants marches towards US border and asks Biden to ‘honor his commitments’ to asylum seekers

By Holden Walter-warner For Dailymail.com

A caravan of Honduran migrants is approaching the U.S. border ahead of Joe Biden‘s inauguration, creating the first major test of Biden’s plan to reverse many of Donald Trump‘s immigrationpolicies.

The group of migrants was originally anywhere between 2,000 and 4,000 strong, although their numbers have dwindled as the march towards the United States has continued.

‘We recognize the importance of the incoming Government of the United States having shown a strong commitment to migrants and asylum seekers, which presents an opportunity for the governments of Mexicoand Central America to develop policies and a migration management that respect and promote the human rights of the population in mobility,’ said a statement from Pueblo Sin Fronteras, a migrants right group. 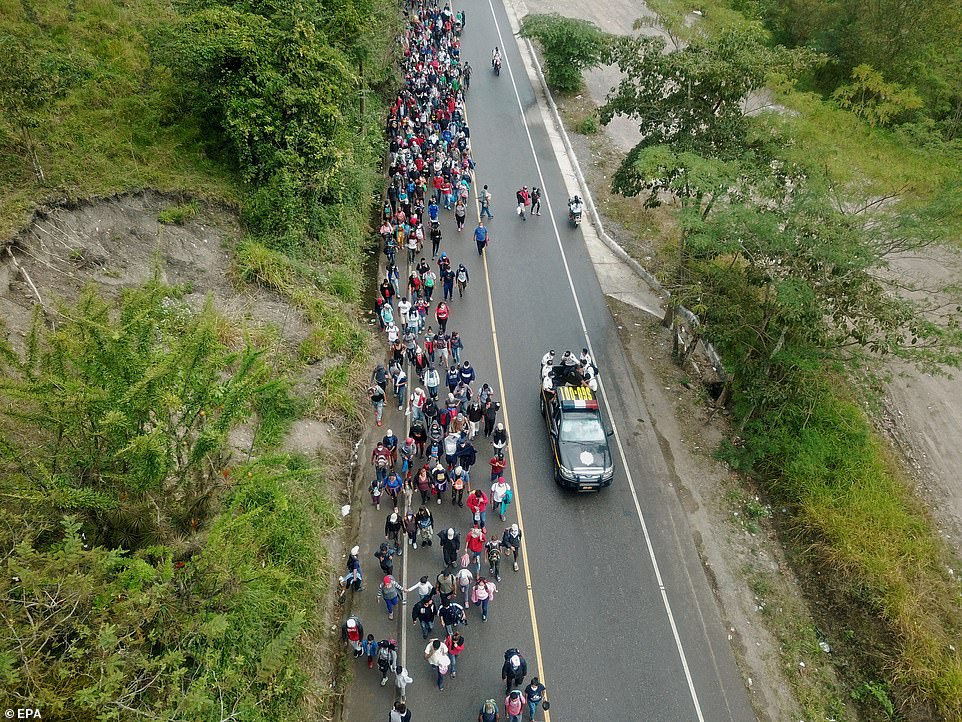 The caravan of migrants started out at least 3,000 strong, although the size of the group has lessened in time 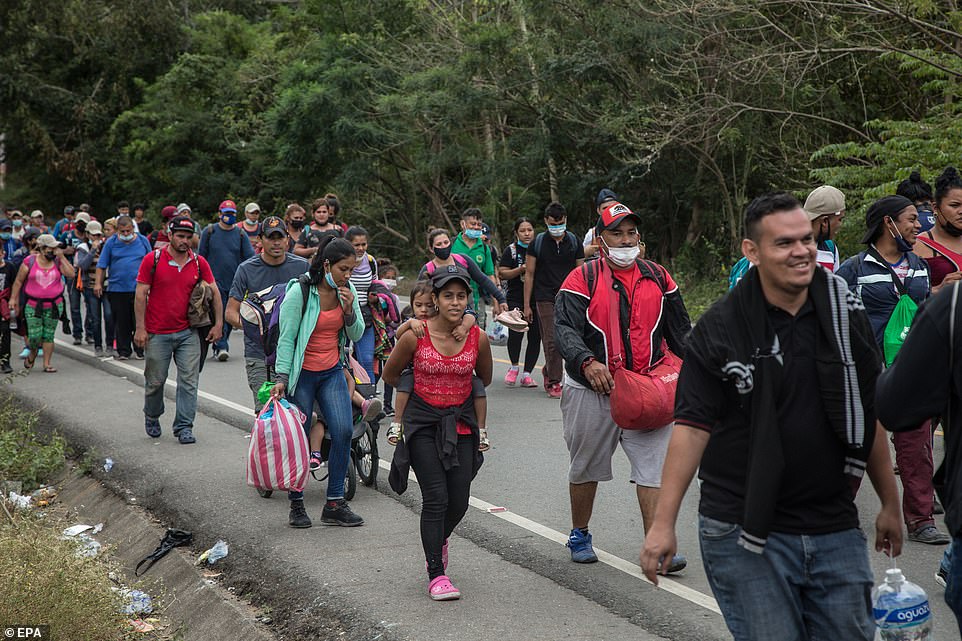 The Hondurans departed from San Pedro Sula in Honduras on Friday morning, trying to escape a dangerous life

It’s not clear what the intended final destination of the caravan is, or if they’ll be able to make it there without being further fractured.

‘There’s no choice,’ Oscar Zaldivar, 25, said about leaving his country. ‘You have to leave here, this country because we’re going to die here.’

The Immigration Institute in Guatemala claimed that around 600 people returned to Honduras voluntarily after entering the country. 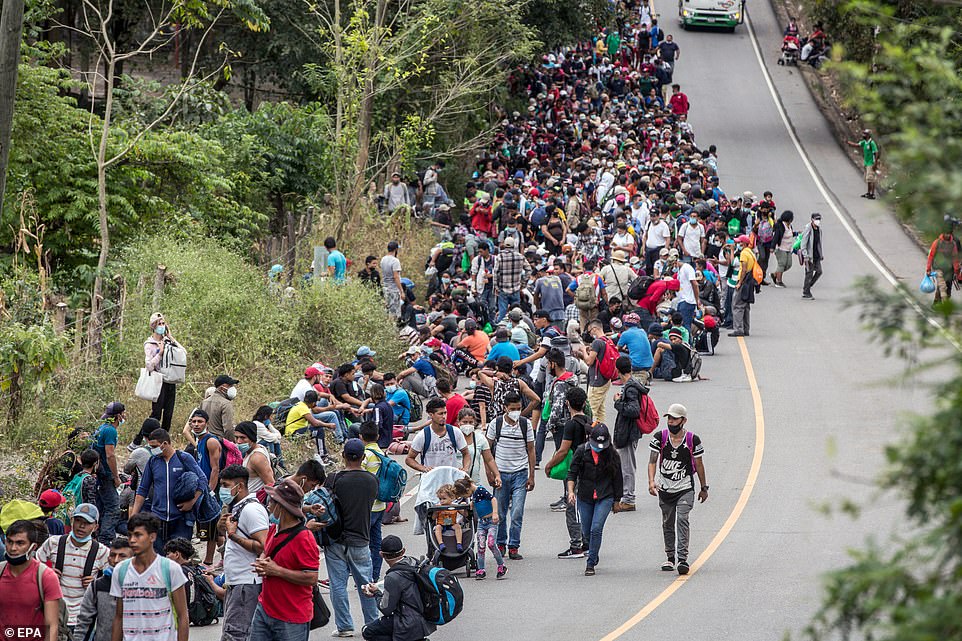 The Hondurans were able to cross into Guatemala by Friday evening, though it’s unclear where they go from here 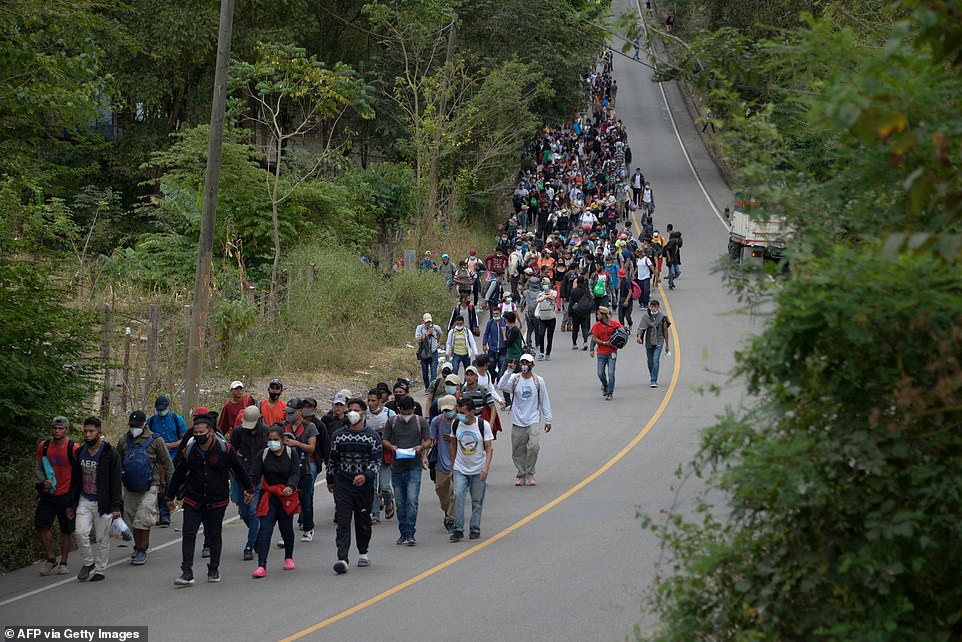 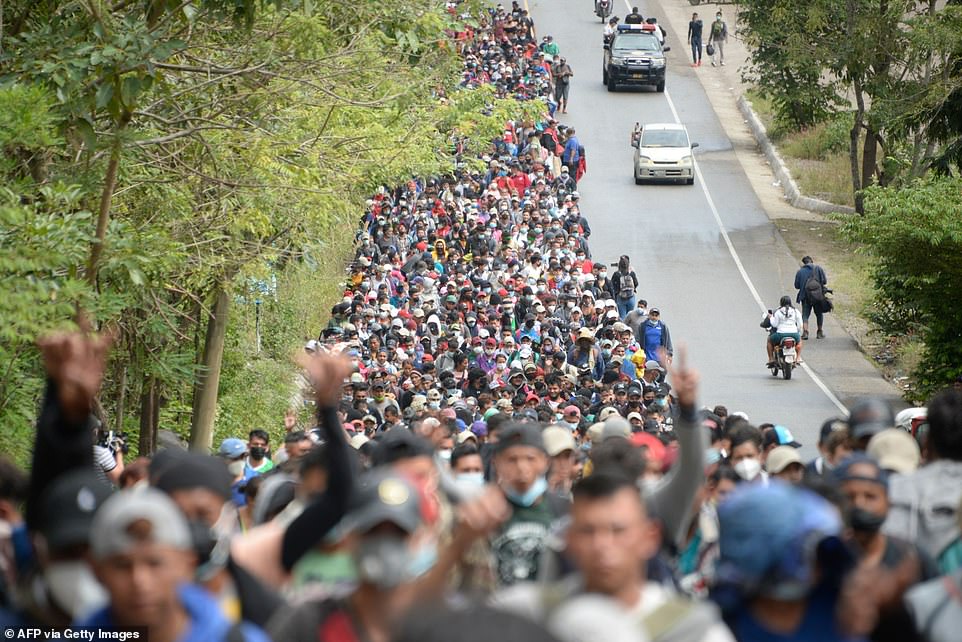 Last month, a caravan forming reportedly failed to even make it to the Guatemalan border. Other caravans recently have managed to make it that far, only to fail to cross into Mexico.

The National Immigration Institute in Mexico has been posting videos and images showing what awaits migrants when they try to cross into the country: various agents and National Guard members, ready to protect the border.

The potential arrive of a migrant caravan to the United States harkens back to the midterm elections in 2018, when Trump made it a central issue. 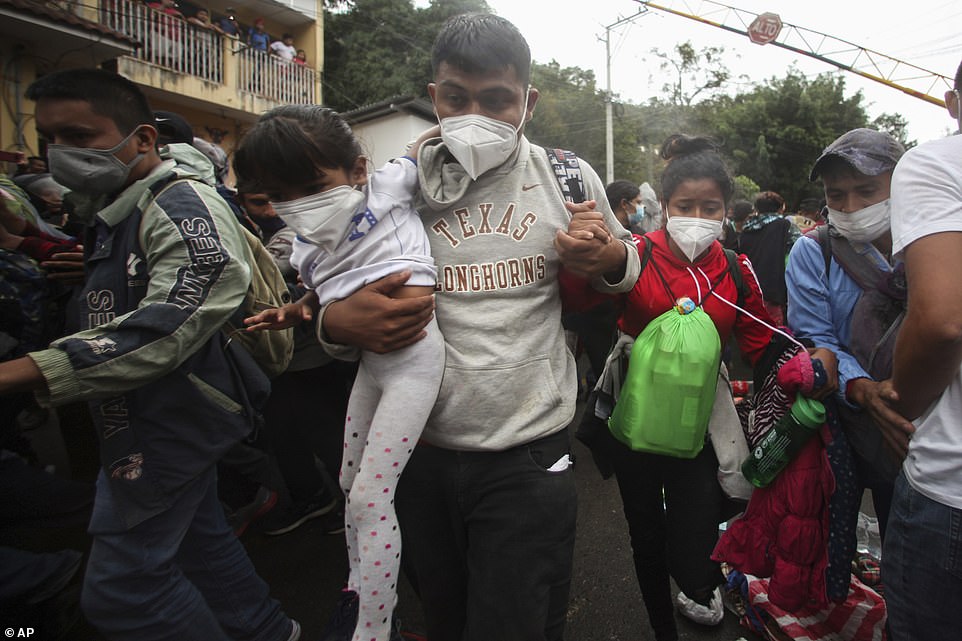 On Friday, many of the migrants forced their way into Guatemala without registering in the country 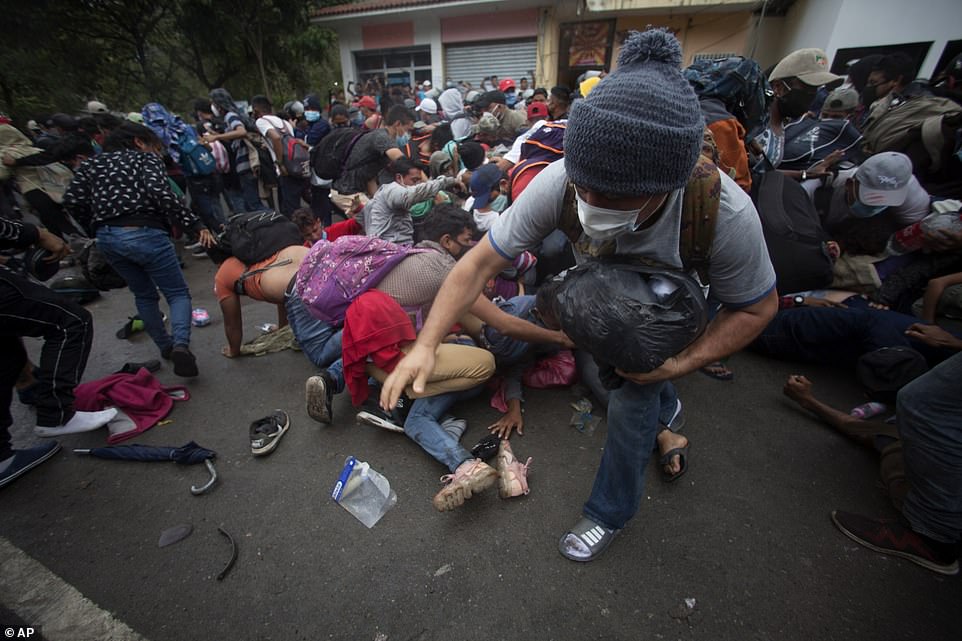 Pictured: Migrants cross into Guatemala and past the Guatemalan soldiers patrolling their border 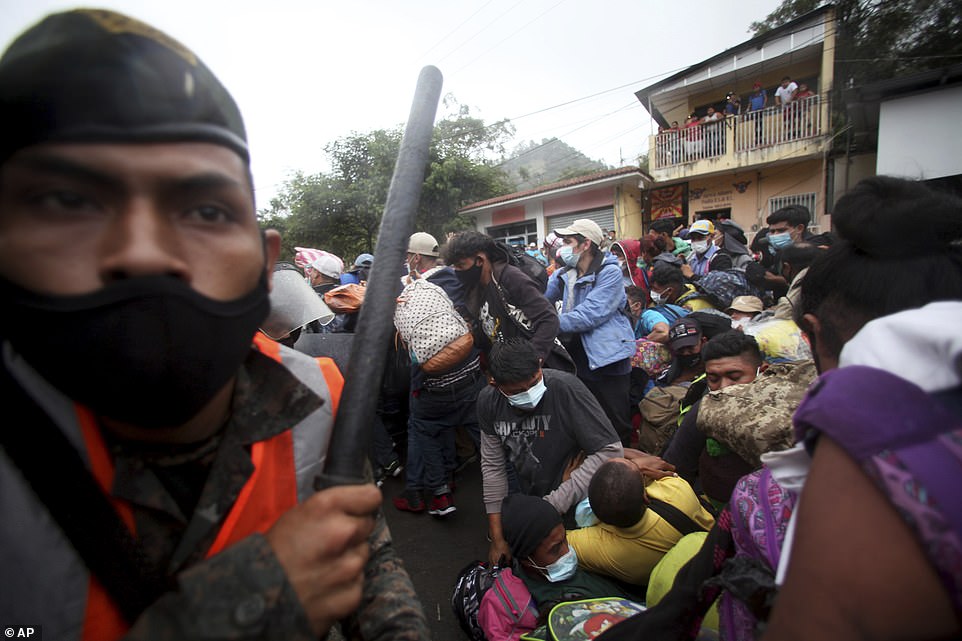 Pictured: Some skirmishes took place as the Honduran migrants forced their way into Guatemala this weekend

Tear gas was used against those trying to gain entry to the United States at the San Ysidro port of entry and many others were simply turned away and forced to apply for asylum while waiting in Mexico.

Trump used the caravans as justification for the border wall he wanted to build between Mexico and the United States, as well as a ‘zero tolerance’ policy that resulted in the separation of children and parents at the border.

Trump referred to the caravans as an ‘invasion’ of the United States. 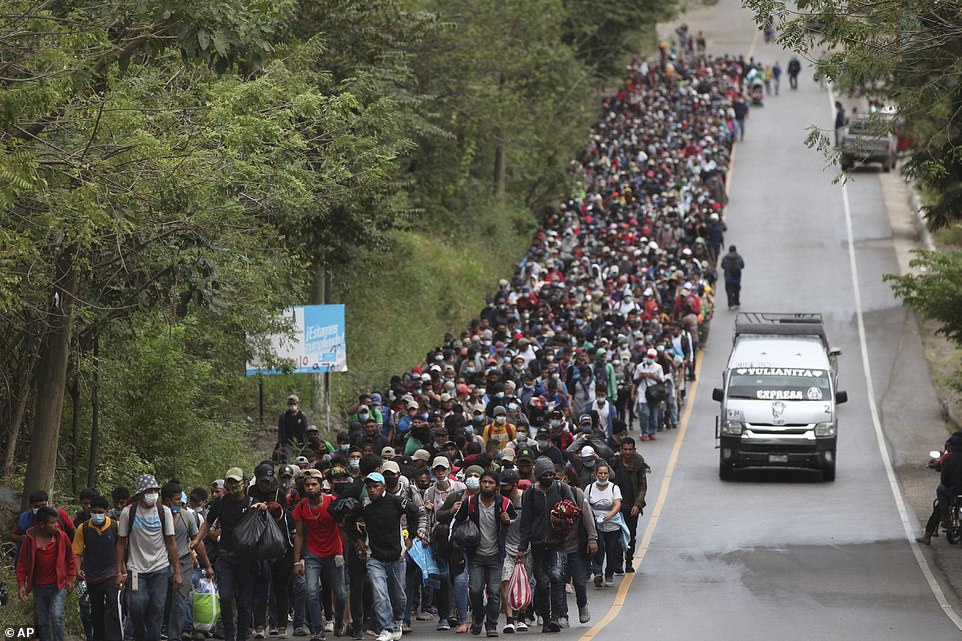 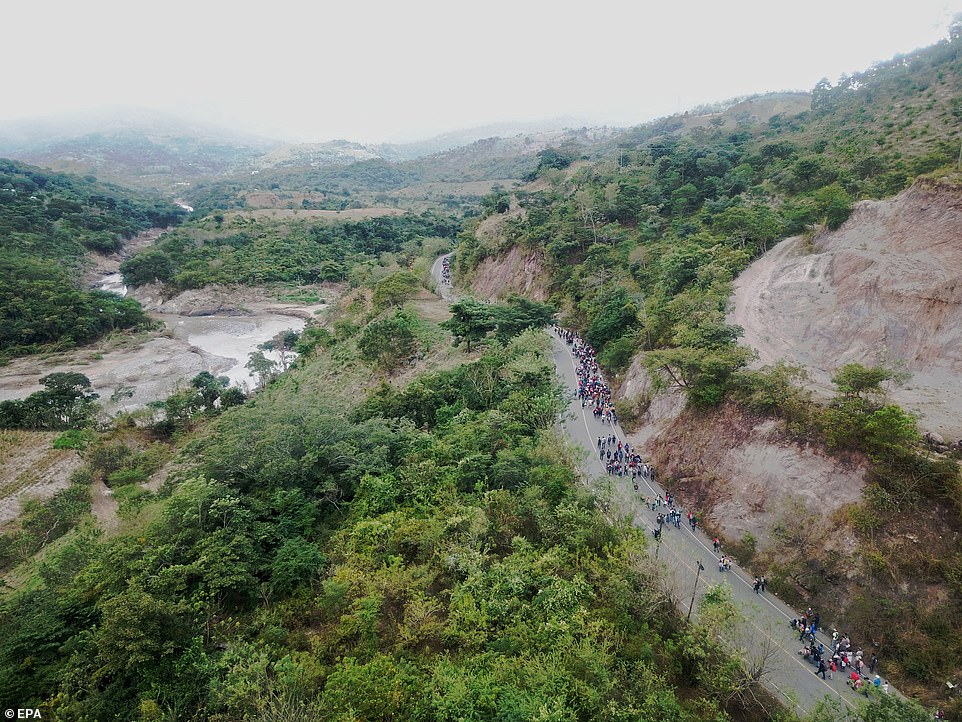 The Migration Protection Protocols (MPP) are another byproduct of the narrative surrounding the caravans. It required some migrants to remain in Mexico before they could have an immigration court hearing in America.

Many of these policies are likely to be altered or reversed altogether by the incoming Biden administration, though.

Biden has promised to create ‘a clear roadmap to citizenship’ on his first day in office for 11 million living in the United States unlawfully.

He also promised to find a way to permanently protect DACA, which Trump has tried to end through the courts. 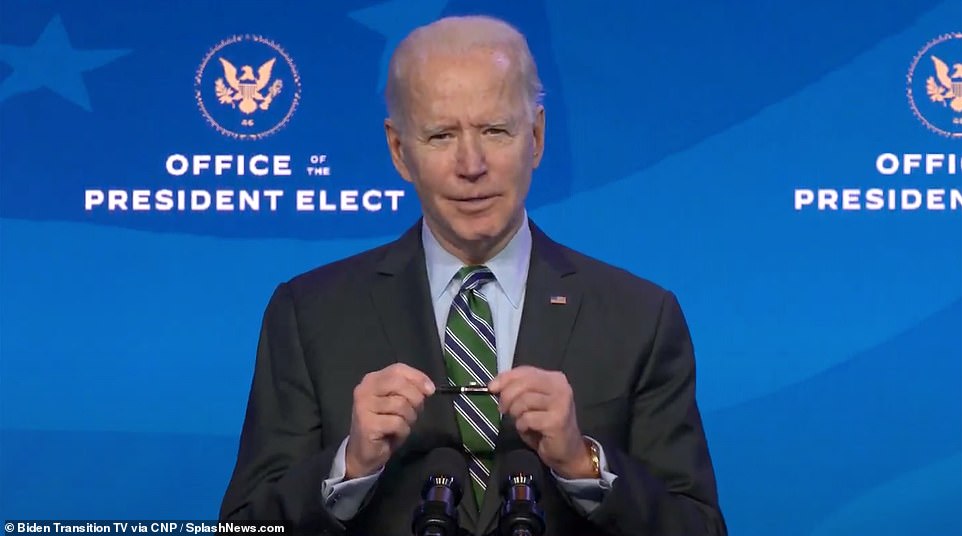 Reuters reports Biden claimed he would end the MPP on his first day in office as well, although his transition team has since suggested that it will take longer to do so, especially when trying to keep everyone safe from COVID-19.

‘Our priority is to reopen asylum processing at the border consistent with the capacity to do so safely and to protect public health, especially in the context of COVID-19,’ Susan Rice said to Spanish wire service EFE. ‘This effort will begin immediately but it will take months to develop the capacity that we will need to reopen fully.’

Biden also plans to increase the cap of resettled refugees to 125,000 after Trump set the number at a record-low 15,000 refugees this year.