No, a Black man didn’t invent the light bulb. But Lewis Howard Latimer made it better 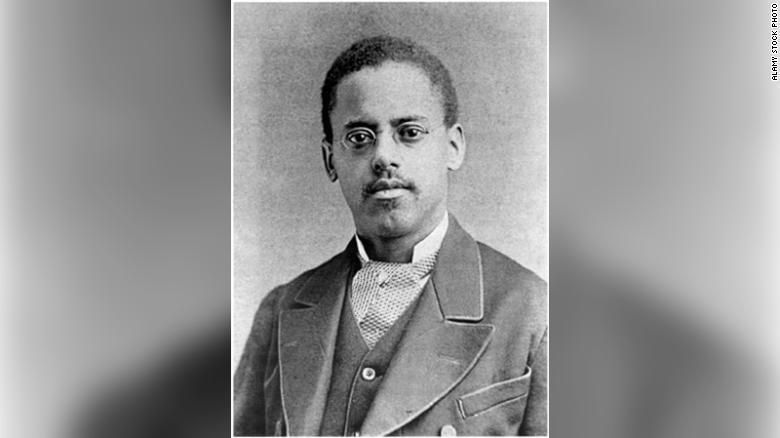 (CNN)On Thursday, presidential candidate Joe Biden claimed that a Black man had invented the light bulb, not “a White guy named Edison.”Biden was at a community meeting in Kenosha, Wisconsin, the site of the recent police shooting of Jacob Blake. He was addressing the ways in which Black Americans are stripped from American history and aren’t discussed in schools. The thing is, though, his facts were a little off. As far as we know, Edison did invent the light bulb, but a Black inventor named Lewis Latimer actually made it better and more accessible.Here’s how it went down.Content by RVshareConquer cabin fever safely with RVshare this summerFrom simple camping trips to coast-to-coast explorations, the rentable fleet of 100,000 RVs means you can have outdoor adventures without risking you and your loved ones’ health.

Beginning in 1878, Thomas Edison spent over a year trying to develop an incandescent light bulb using electricity to heat a thin filament. Edison’s bulb looked a lot like what we’re used to — a filament in a glass bulb, according to the Franklin Institute.But after years of experiments and thousands of tests of various filament materials, his longest-lasting light bulb could only last for about 15 hours before the filament burned out. 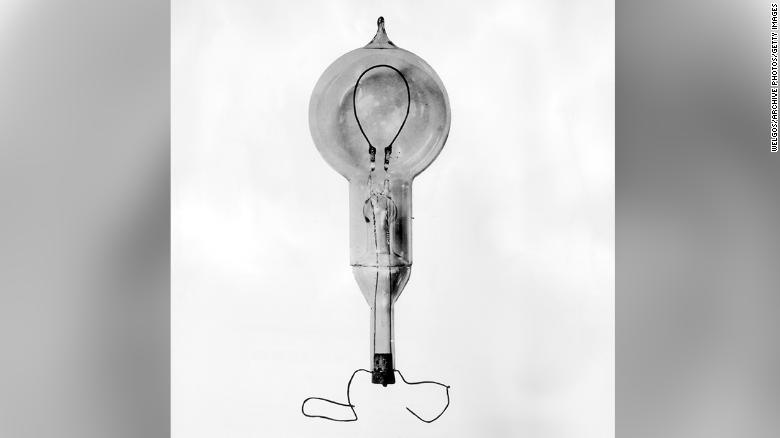 The first electric light bulb, invented by Thomas Alva Edison in 1879 and patented on January 27, 1880.

Around the same time Edison was experimenting with his bulb — using carbonized filaments of bay wood, cedar, bamboo and other fibers — so was Latimer. Born just a year after Edison in 1848, Latimer was an inventor known for working closely with Alexander Graham Bell, who invented the telephone (though some claim that invention is actually Latimer’s).According to the Massachusetts Institute of Technology, Latimer improved upon Edison’s original design. Latimer created a light bulb with a more durable filament made of carbon. He sold the patent to the US Electric Co. in 1881, and a year later patented a process for efficiently manufacturing the carbon filament. He even wrote a book in 1890 on electric lighting, the first of its kind. Because of Latimer’s contributions, incandescent light bulbs became more affordable and practical, MIT says, thus transforming American culture.

Who Invented the Light Bulb? 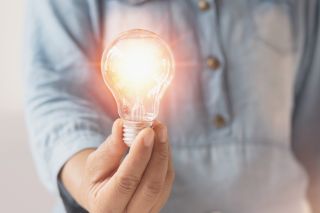 Though Thomas Edison is usually credited with the invention of the light bulb, the famous American inventor wasn’t the only one who contributed to the development of this revolutionary technology. Many other notable figures are also remembered for their work with electric batteries, lamps and the creation of the first incandescent bulbs.

The story of the light bulb begins long before Edison patented the first commercially successful bulb in 1879. In 1800, Italian inventor Alessandro Volta developed the first practical method of generating electricity, the voltaic pile. Made of alternating discs of zinc and copper — interspersed with layers of cardboards soaked in salt water — the pile conducted electricity when a copper wire was connected at either end. While actually a predecessor of the modern battery, Volta’s glowing copper wire is also considered to be one of the earliest manifestations of incandescent lighting.

Not long after Volta presented his discovery of a continuous source of electricity to the Royal Society in London, Humphry Davy, an English chemist and inventor, produced the world’s first electric lamp by connecting voltaic piles to charcoal electrodes. Davy’s 1802 invention was known as an electric arc lamp, named for the bright arc of light emitted between its two carbon rods.

While Davy’s arc lamp was certainly an improvement on Volta’s stand-alone piles, it still wasn’t a very practical source of lighting. This rudimentary lamp burned out quickly and was much too bright for use in a home or workspace. But the principles behind Davy’s arc light were used throughout the 1800s in the development of many other electric lamps and bulbs.

In 1840, British scientist Warren de la Rue developed an efficiently designed light bulb using a coiled platinum filament in place of copper, but the high cost of platinum kept the bulb from becoming a commercial success. And in 1848, Englishman William Staite improved the longevity of conventional arc lamps by developing a clockwork mechanism that regulated the movement of the lamps’ quick-to-erode carbon rods. But the cost of the batteries used to power Staite’s lamps put a damper on the inventor’s

In 1850, English chemist Joseph Swan tackled the cost-effectiveness problem of previous inventors and by 1860 he had developed a light bulb that used carbonized paper filaments in place of ones made of platinum. Swan received a patent in the United Kingdom in 1878, and in February 1879 he demonstrated a working lamp in a lecture in Newcastle, England, according to the Smithsonian Institution. Like earlier renditions of the light bulb, Swan’s filaments were placed in a vacuum tube to minimize their exposure to oxygen, extending their lifespan. Unfortunately for Swan, the vacuum pumps of his day were not efficient as they are now, and while his prototype worked well for a demonstration, it was impractical in actual use.

Edison realized that the problem with Swan’s design was the filament. A thin filament with high electrical resistance would make a lamp practical because it would require only a little current to make it glow. He demonstrated his light bulb in December 1879. Swan incorporated the improvement into his light bulbs and founded an electrical lighting company in England. Edison sued for patent infringement, but Swan’s patent was a strong claim, at least in the United Kingdom, and the two inventors eventually joined forces and formed Edison-Swan United, which became one of the world’s largest manufacturers of light bulbs, according to the Museum of Unnatural Mystery.

Swan wasn’t the only competitor Edison faced. In 1874, Canadian inventors Henry Woodward and Matthew Evans filed a patent for an electric lamp with different-sized carbon rods held between electrodes in a glass cylinder filled with nitrogen. The pair tried, unsuccessfully, to commercialize their lamps but eventually sold their patent to Edison in 1879.

The success of Edison’s light bulb was followed by the founding of the Edison Electric Illuminating Company of New York in 1880. The company was started with financial contributions from J.P. Morgan and other wealthy investors of the time. The company constructed the first electrical generating stations that would power electrical system and newly patented bulbs. The first generating station was opened in September 1882 on Pearl Street in lower Manhattan.

Other inventors, such as William Sawyer and Albon Man, threw in the towel, merging their company with Edison’s to form General Electric, according to the U.S. Department of Energy (DOE).

Where Edison succeeded and surpassed his competition was in developing a practical and inexpensive light bulb, according to the DOE. Edison and his team of researchers in Edison’s laboratory in Menlo Park, N.J., tested more than 3,000 designs for bulbs between 1878 and 1880. In November 1879, Edison filed a patent for an electric lamp with a carbon filament. The patent listed several materials that might be used for the filament, including cotton, linen and wood. Edison spent the next year finding the perfect filament for his new bulb, testing more than 6,000 plants to determine which material would burn the longest.

Several months after the 1879 patent was granted, Edison and his team discovered that a carbonized bamboo filament could burn for more than 1,200 hours. Bamboo was used for the filaments in Edison’s bulbs until it began to be replaced by longer-lasting materials in the 1880s and early 1900s. [Related: What’s the Longest Burning Light Bulb?]

In 1882, Lewis Howard Latimer, one of Edison’s researchers, patented a more efficient way of manufacturing carbon filaments. And in 1903, Willis R. Whitney invented a treatment for these filaments that allowed them to burn bright without darkening the insides of their glass bulbs.

William David Coolidge, an American physicist with General Electric, improved the company’s method of manufacturing tungsten filaments in 1910. Tungsten, which has the highest melting point of any chemical element, was known by Edison to be an excellent material for light bulb filaments, but the machinery needed to produce super-fine tungsten wire was not available in the late 19th century. Tungsten is still the primary material used in incandescent bulb filaments today.

Light-emitting diodes (LEDs) are now considered the future of lighting due to a lower energy requirement to run, a lower monthly price tag, and a longer life than traditional incandescent light bulbs.

Nick Holonyak, an American scientist at General Electric, accidently invented the red LED light while trying to create a laser in the early 1960s. As with other inventors, the principle that some semiconductors glowed when an electric current was applied had been known since the early 1900s, but Holonyak was the first to patent it for use as a light fixture.

Within a few years, yellow and green LEDs were added to the mix and used in several applications including indicator lights, calculator displays, and traffic lights, according to the DOE. The blue LED was created in the early 1990s by Isamu Akasaki, Hiroshi Amano, and Shuji Nakamura, a group of Japanese and American scientists, and for which they won the 2014 Nobel Prize in Physics. The blue LED allowed scientists to create white LED light bulbs by coating the diodes with phosphor.

Several lighting companies are pushing the boundaries of what light bulbs can do, including Phillips and Stack. Phillips is one of several companies that have created wireless light bulbs that can be controlled via smartphone app. The Phillips Hue uses LED technology that can quickly be turned on or off or dimmed by a flick on a smart phone screen and can also be programmed. The higher-end Hue light bulbs can even be set to a large range of colors (only about sixteen million) and synced with music, movies, and video games.

Stack, begun by engineers from Tesla and NASA, developed a smart light bulb using LED technology with a wide range of functions. It can automatically sense the ambient lighting and adjust as needed, it turns off and on via motion sensor when someone enters the room, can be used as a wake up alert, and even adjusts color throughout the day to fit with human’s natural circadian cycles and patterns of natural light. The light bulbs also have a built-in learning program that adapts to inputs given by residents over time. And all of these functions can be programmed or monitored from any smart phone or tablet. It is estimated that Stack smart light bulbs can use about sixty percent less energy than a typical LED light bulb and lasts between twenty and thirty thousand hours depending on the model (as compared to anywhere between twenty five and fifty thousand hours for typical LED light bulbs in proper housings).

These light bulbs are compatible (or soon will be) with many of the options for turning an entire home into a smart home including usage with Amazon Alexa, Google Home, and Apple HomeKit.Amazon Echo Controls Philips Hue Lights

Rachel Ross contributed to this article.