Tennessee state senator Katrina Robinson is accused of stealing $600,000 in federal grant money to pay for her wedding, honeymoon and divorce as well as treating her daughter to a Jeep

By RAVEN SAUNT FOR MAILONLINE 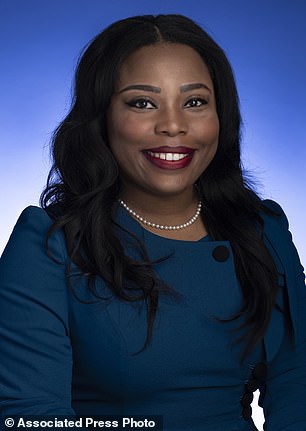 A state senator has been accused of stealing $600,000 to fund a lavish lifestyle which included her wedding, honeymoon and even her divorce.

Tennessee state senator Katrina Robinson, 39, faces up to 20 years in jail after being charged with theft and embezzlement from government funds.

The money was intended to fund a nurse training program at a vocational school run by Ms. Robinson, but instead was siphoned off to add to her salary, help fund her other businesses and pay living expenses, according to an affidavit.

In addition to serving as a state senator, Ms. Robinson, a Memphis Democrat elected in 2018 who represents Shelby County, is director of The Healthcare Institute, a for-profit college that provides training programs for certified nursing assistant, phlebotomist and licensed practical nursing.

Ms. Robinson, a registered nurse, founded the school in 2015, according to its website.Top Articlesby Daily MailNBA season re‑opens as players kneel in protest duringanthemREAD MORESKIP AD

Prosecutors say from from 2015 through 2019, Robinson stole more than $600,000 of the money from the Memphis-based school to pay for her wedding and honeymoon. 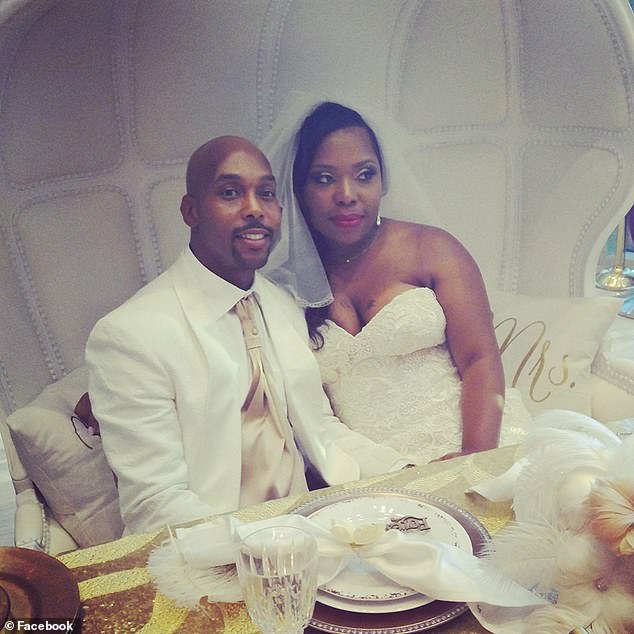 Prosecutors say from from 2015 through 2019, Robinson stole more than $600,000 from the Memphis-based school to pay for her wedding (pictured on the day at Halloran Center at the Orpheum Theater in Memphis in 2016) as well as for her honeymoon 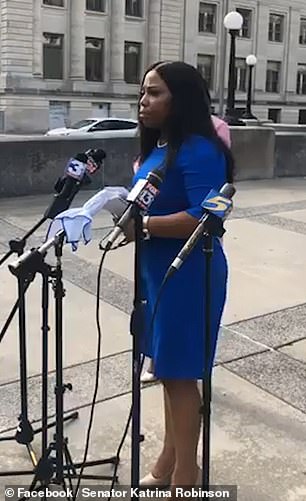 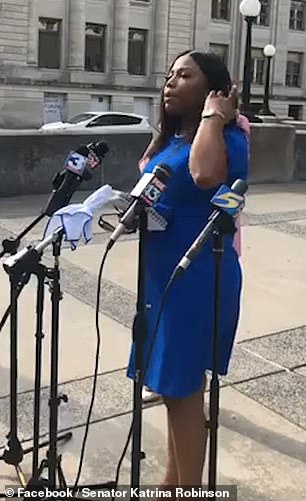 Robinson (pictured) said she will continue serving her district in the Senate ‘with the same integrity, the same passion that I’ve demonstrated since you’ve elected me to this office’Katrina Robinson makes address after embezzlement and theft charges

But she then spent some of the funds to cover the cost of legal fees for her divorce, home improvements and a snow-cone business – Kool Kidz Konez – operated by her children.

Other personal expenses ranged from a Jeep Renegade for her daughter, a family trip to Jamaica and a Louis Vuitton handbag, prosecutors added.

According to the complaint The Healthcare Institute received more than $2.2million in federal grants from the US Department of Health and Human Services to train nurse.

The FBI searched The Healthcare Institute as well as Robinson’s home in February this year but agents returned to her house on Tuesday, according to FBI spokesman Joel Siscovic.

An FBI affidavit alleges the federal funds were deposited into the school’s bank account for its operations. The funds were then ‘commingled indiscriminately with personal expenditure for the benefit of Robinson and her immediate family,’ FBI special agent Matthew Pruitt wrote.

The FBI said the department received a complaint from someone who claimed Robinson used the school’s funds to buy a Louis Vuitton handbag for $550.

Robinson also spent thousands on credit card payments, hair and beauty supplies, and improvements to her body aesthetics business and her house, including a wrought iron front door valued at more than $5,000, the FBI said. 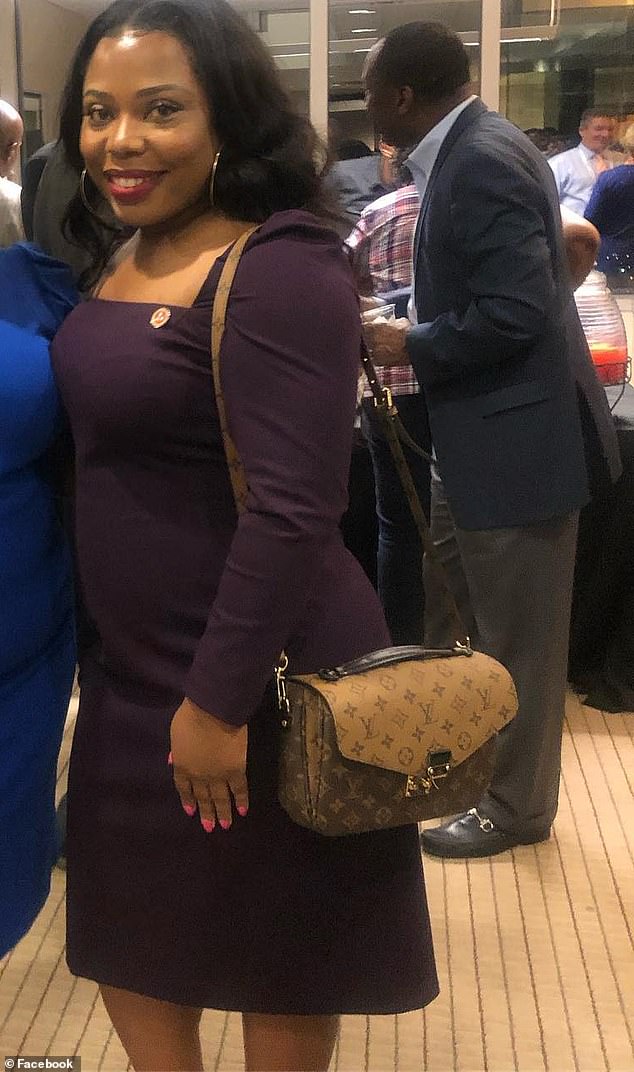 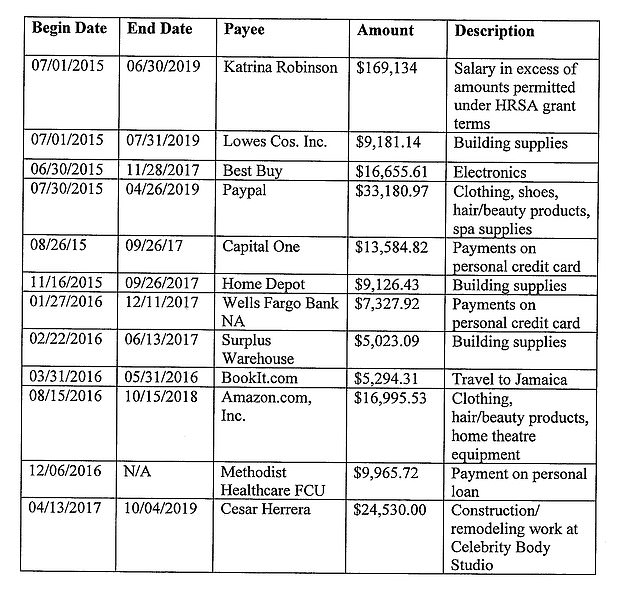 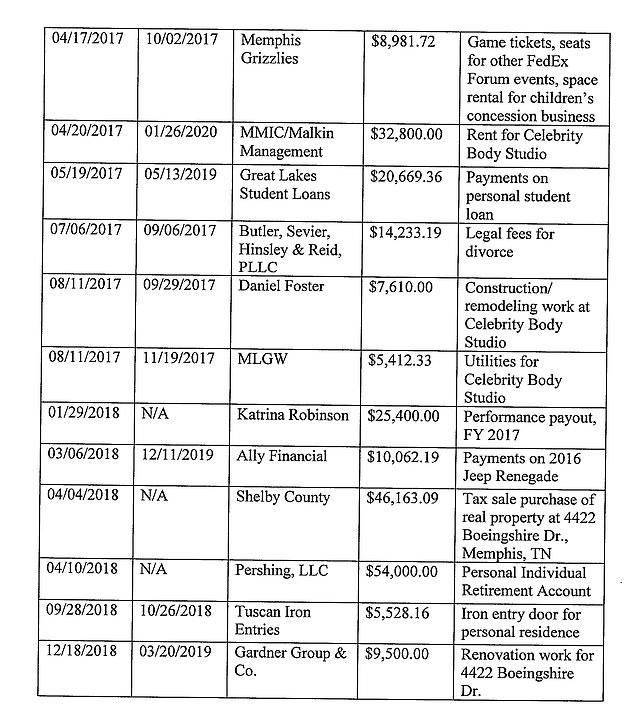 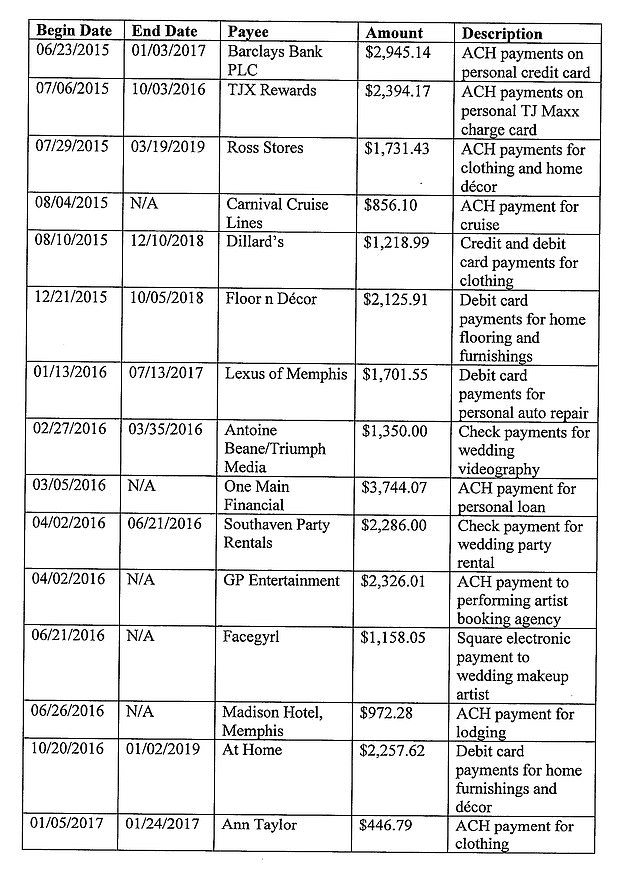 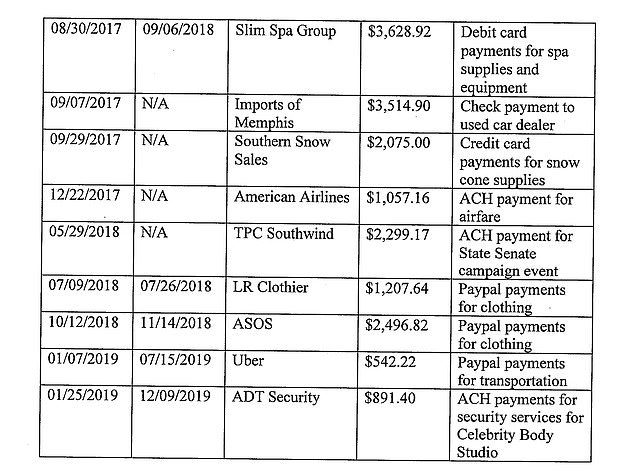 The discrepancies amount to $169,134 more in salary than she was allowed to under salary amounts permitted by the federal grant, the affidavit said (pictured charges listed in the document)

Based on bank records, over a four-year period, investigators found evidence that Robinson had given herself a $25,400 performance bonus, paid herself more than her allocated salary and transferred $54,000 to a retirement fund, according to charging documents.

The discrepancies amount to $169,134 more in salary than she was allowed to under salary amounts permitted by the federal grant, the affidavit said.

If convicted, Robinson faces a possible sentence of up to 20 years in federal prison, three years of supervised release and a $250,000 fine.

The state senator is still running for re-election in 2022.

During a news conference, Robinson’s attorney Janika White said federal prosecutors were using a statute to charge Robinson that is ‘broad and overreaching’ and Robinson would be vindicated.

White added that Robinson is a nurse who has been traveling outside of the state to help treat patients during the new coronavirus pandemic.

Robinson said she will continue serving her district in the Senate ‘with the same integrity, the same passion that I’ve demonstrated since you’ve elected me to this office’.

‘It is believed that if I were not in the position that I’m in, that if I did not champion the voices, the views and the faces that I represent, that I would not be in this moment right now,’ Robinson said.

Lieutenant Governor Randy McNally will be asking the Senate Ethics Committee to look into the ‘serious criminal charges,’ spokesman Adam Kleinheider said in an email.

In a statement, the Senate Democratic Caucus said Robinson’s work in the state Legislature ‘is not in question’ and she ‘deserves the presumption of innocence and due process’.