How Vietnam managed to keep its coronavirus death toll at zero

(CNN)When the world looked to Asia for successful examples in handling the novel coronavirus outbreak, much attention and plaudits were paid to South Korea, Taiwan and Hong Kong.But there’s one overlooked success story — Vietnam. The country of 97 million people has not reported a single coronavirus-related death and on Saturday had just 328 confirmed cases, despite its long border with China and the millions of Chinese visitors it receives each year.This is all the more remarkable considering Vietnam is a low-middle income country with a much less-advanced healthcare system than others in the region. It only has 8 doctors for every 10,000 people, a third of the ratio in South Korea, according to the World Bank.After a three-week nationwide lockdown, Vietnam lifted social distancing rules in late April. It hasn’t reported any local infections for more than 40 days. Businesses and schools have reopened, and life is gradually returning to normal.Content by CNN UnderscoredThe comfiest pants for lounging around the houseWith the anxiety and distress you may be feeling, wearing clothes that are in any way uncomfortable is simply not an option. 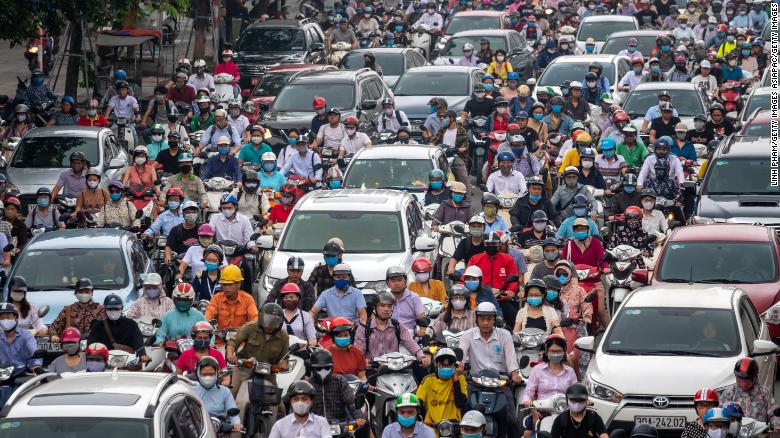 Motorbike riders with face masks are stuck in traffic during the morning peak hour on May 19 in Hanoi.To skeptics, Vietnam’s official numbers may seem too good to be true. But Guy Thwaites, an infectious disease doctor who works in one of the main hospitals designated by the Vietnamese government to treat Covid-19 patients, said the numbers matched the reality on the ground.”I go to the wards every day, I know the cases, I know there has been no death,” said Thwaites, who also heads the Oxford University Clinical Research Unit in Ho Chi Minh City.”If you had unreported or uncontrolled community transmission, then we’ll be seeing cases in our hospital, people coming in with chest infections perhaps not diagnosed — that has never happened,” he said.So how has Vietnam seemingly bucked the global trend and largely escaped the scourge of the coronavirus? The answer, according to public health experts, lies in a combination of factors, from the government’s swift, early response to prevent its spread, to rigorous contact-tracing and quarantining and effective public communication.

Vietnam started preparing for a coronavirus outbreak weeks before its first case was detected.At the time, the Chinese authorities and the World Health Organization had both maintained that there was no “clear evidence” for human-to-human transmission. But Vietnam was not taking any chances.”We were not only waiting for guidelines from WHO. We used the data we gathered from outside and inside (the country to) decide to take action early,” said Pham Quang Thai, deputy head of the Infection Control Department at the National Institute of Hygiene and Epidemiology in Hanoi. 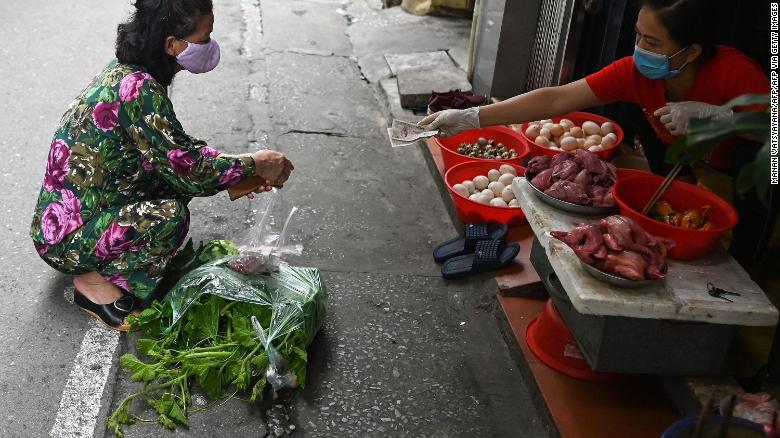 A woman practises social distancing while shopping for groceries from behind a line at a wet market in Hanoi.By early January, temperature screening was already in place for passengers arriving from Wuhan at Hanoi’s international airport. Travelers found with a fever were isolated and closely monitored, the country’s national broadcaster reported at the time.By mid-January, Deputy Prime Minister Vu Duc Dam was ordering government agencies to take “drastic measures” to prevent the disease from spreading into Vietnam, strengthening medical quarantine at border gates, airports and seaports.On January 23, Vietnam confirmed its first two coronavirus cases — a Chinese national living in Vietnam and his father, who had traveled from Wuhan to visit his son. The next day, Vietnam’s aviation authorities canceled all flights to and from Wuhan.As the country celebrated the Lunar New Year holiday, its Prime Minister Nguyen Xuan Phuc declared war on the coronavirus. “Fighting this epidemic is like fighting the enemy,” he said at an urgent Communist Party meeting on January 27. Three days later, he set up a national steering committee on controlling the outbreak — the same day the WHO declared the coronavirus a public health emergency of international concern.On February 1, Vietnam declared a national epidemic — with just six confirmed cases recorded across the country. All flights between Vietnam and China were halted, followed by the suspension of visas to Chinese citizens the next day.Over the course of the month, the travel restrictions, arrival quarantines and visa suspensions expanded in scope as the coronavirus spread beyond China to countries like South Korea, Iran and Italy. Vietnam eventually suspended entry to all foreigners in late March. 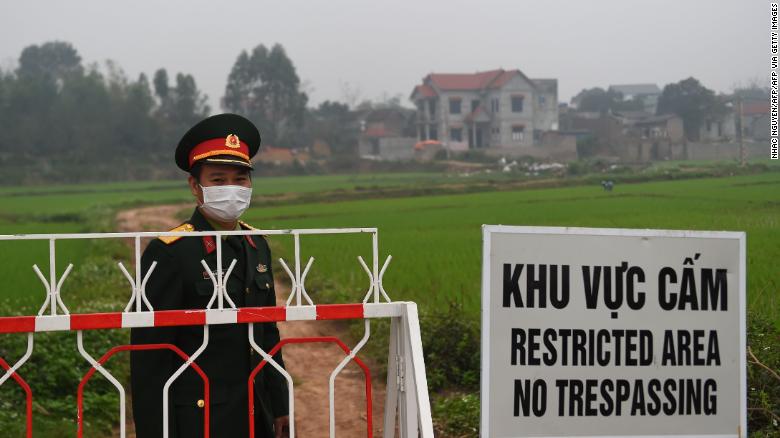 A Vietnamese People’s Army officer stands next to a sign warning about the lockdown on the Son Loi commune in Vinh Phuc province on February 20.Vietnam was also quick to take proactive lockdown measures. On February 12, it locked down an entire rural community of 10,000 people north of Hanoi for 20 days over seven coronavirus cases — the first large-scale lockdown known outside China. Schools and universities, which had been scheduled to reopen in February after the Lunar New Year holiday, were ordered to remain closed, and only reopened in May.Thwaites, the infectious disease expert in Ho Chi Minh City, said the speed of Vietnam’s response was the main reason behind its success.”Their actions in late January and early February were very much in advance of many other countries. And that was enormously helpful … for them to be able to retain control,” he said.

The decisive early actions effectively curbed community transmission and kept Vietnam’s confirmed cases at just 16 by February 13. For three weeks, there were no new infections — until the second wave hit in March, brought by Vietnamese returning from abroad.Authorities rigorously traced down the contacts of confirmed coronavirus patients and placed them in a mandatory two-week quarantine.”We have a very strong system: 63 provincial CDCs (centers for disease control), more than 700 district-level CDCs, and more than 11,000 commune health centers. All of them attribute to contact tracing,” said doctor Pham with the National Institute of Hygiene and Epidemiology.A confirmed coronavirus patient has to give health authorities an exhaustive list of all the people he or she has met in the past 14 days. Announcements are placed in newspapers and aired on television to inform the public of where and when a coronavirus patient has been, calling on people to go to health authorities for testing if they have also been there at the same time, Pham said. 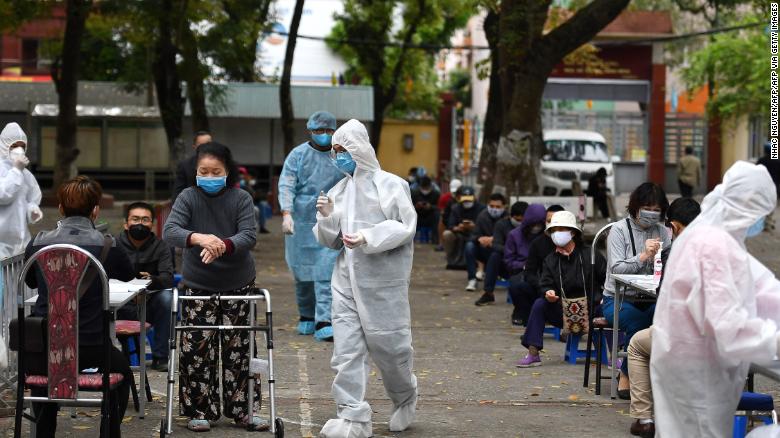 A woman stands in a queue to provide a sample at a makeshift testing centre near the Bach Mai hospital in Hanoi on March 31.When the Bach Mai hospital in Hanoi, one of the biggest hospitals in Vietnam, became a coronavirus hotspot with dozens of cases in March, authorities imposed a lockdown on the facility and tracked down nearly 100,000 people related to the hospital, including medics, patients, visitors and their close contacts, according to Pham.”Using contact-tracing, we located almost everyone, and asked them to stay home and self quarantine, (and that) if they have any symptoms, they can visit the health centers for free testing,” he said.Authorities also tested more than 15,000 people linked to the hospitals, including 1,000 health care workers.Vietnam’s contact-tracing effort was so meticulous that it goes after not only the direct contacts of an infected person, but also indirect contacts. “That’s one of the unique parts of their response. I don’t think any country has done quarantine to that level,” Thwaites said.All direct contacts were placed in government quarantine in health centers, hotels or military camps. Some indirect contacts were ordered to self isolate at home, according to astudy of Vietnam’s Covid-19 control measures by about 20 public health experts in the country. 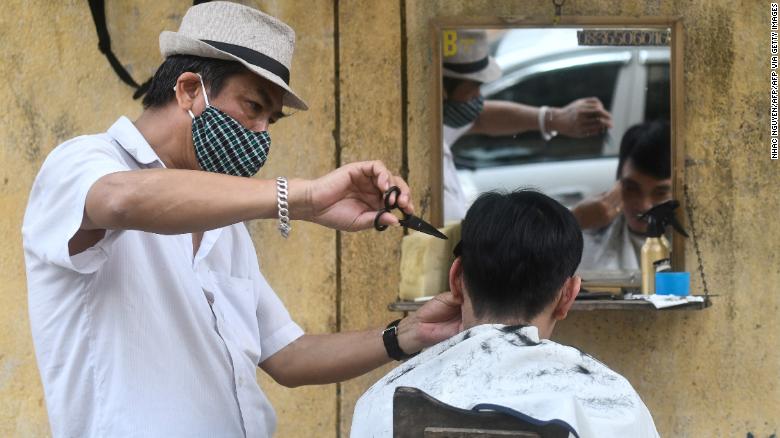 A roadside barber donning a face mask gives a haircut to a customer in Hanoi.As of May 1, about 70,000 people had been quarantined in Vietnam’s government facilities, while about 140,000 had undergone isolation at home or in hotels, the study said.The study also found that of the country’s first 270 Covid-19 patients, 43 percent were asymptomatic cases — which it said highlighted the value of strict contact-tracing and quarantine. If authorities had not proactively sought out people with infection risks, the virus could have quietly spread in communities days before being detected.

From the start, the Vietnamese government has communicated clearly with the public about the outbreak.Dedicated websites, telephone hotlines and phone apps were set up to update the public on the latest situations of the outbreak and medical advisories. The ministry of health also regularly sent out reminders to citizens via SMS messages.Pham said on a busy day, the national hotlines alone could receive 20,000 calls, not to count the hundreds of provincial and district-level hotlines. 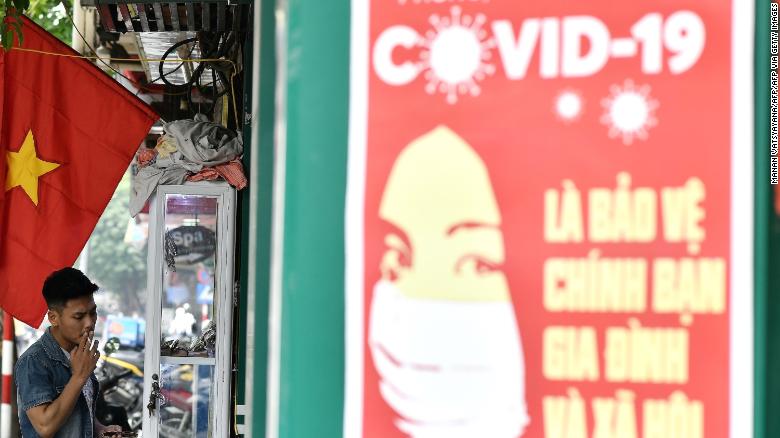 A propaganda poster on preventing the spread of the coronavirus is seen on a wall as a man smokes a cigarette along a street in Hanoi.The country’s massive propaganda apparatus was also mobilized, raising awareness of the outbreak through loudspeakers, street posters, the press and social media. In late February, the health ministry released a catchy music video based on a Vietnamese pop hit to teach people how to properly wash their hands and other hygiene measures during the outbreak. Known as the “hand-washing song,” it immediately went viral, so far attracting more than 48 million views on Youtube.Thwaites said Vietnam’s rich experience in dealing with infectious disease outbreaks, such as the SARS epidemic from 2002 to 2003 and the following avian influenza, had helped the government and the public to better prepare for the Covid-19 pandemic.”The population is much more respectful of infectious diseases than many perhaps more affluent countries or countries that don’t see as much infectious disease — Europe, the UK and the US for example,” he said.”The country understands that these things need to be taken seriously and complies with guidance from the government on how to prevent the infection from spreading.”