US-China trade war will last over a year, Many experts believe the trade war will persist for a long time, potentially putting the brakes on China’s economy.   © Reuters

HONG KONG — Concerns are spreading over the impact a prolonged trade war between the U.S. and China could have on the Chinese economy, according to a joint survey of China-focused economists by Nikkei and Nikkei Quick News.

Economists project that the country’s real gross domestic product grew 6.6% on average between July and September, slightly slowing down from 6.7% for the April-June period.

Many experts believe the trade war will persist for a long time, potentially putting the brakes on the world’s second-largest economy.

The U.S. and China have slapped retaliatory tariffs on each other’s goods, and the momentum for dialogue between the two countries is fading. The deterioration in manufacturers’ sentiment is one impact gradually surfacing in the Chinese economy.

“The trade war is the biggest risk to the Chinese economy, not only for the export sector but also the related supply chain,” said Iris Pang, an economist focusing on Greater China at ING Bank. “Among all corporates, SMEs [small and midsize enterprises] would be hit most. As a result, manufacturing and investment in the manufacturing sector would grow slower.”

The structural reforms Beijing initiated before the trade war became full blown are adding downward pressure on the economy.

Yao Wei, chief China economist at Societe Generale Corporate and Investment Banking, said, “More signs of economic slowdown have emerged as deleveraging policies start to bite.” She added that “trade tensions look unlikely to be resolved quickly and may begin to cause material drags on exports.”

The economists gauged the impact of the trade war under a basic scenario that the economy is slowing moderately.

“Trade friction with the U.S. looks set to continue, and this will be an unavoidable drag on growth. However, recent policy stimulus measures will offset the damage from trade by boosting the domestic economy, which should prevent too much of a slowdown,” said Bank of Singapore chief economist Richard Jerram.

The Chinese Communist Party in its Politburo meeting in July decided to continue proactive fiscal policies and prudent and neutral monetary measures as means to support the economy.

“That direction will help improve the negative sentiment in the financial markets and stabilize the country’s monetary system during the three months through December,” said Cheng Shi, chief economist and head of research at ICBC International. Cheng continued: “The positive impact of the measures will become visible in the January-March period after they directly stimulate investment and consumption.”

Fan Xiaochen, a director at MUFG Bank, was also positive on the measures. “Healthy and proactive fiscal and monetary measures will help attract new investments, and the economy will continue growing at a stable pace of more than 6%,” Fan said.

On the other hand, some analysts remain cautious. “We expect infrastructure growth to recover from its low but maintain single-digit growth in the coming year,” said Peter So, managing director and co-head of research at CCB International Securities.

The risk factor that will most likely put downward pressure on the Chinese economy is the possible worsening of the trade war between the U.S. and China — the largest number of analysts surveyed picked this answer from a number of options. 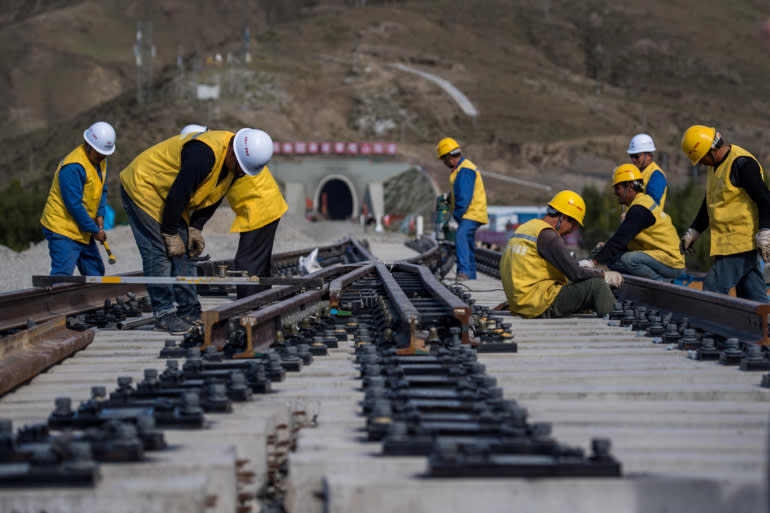 Economists expect the stimulus to kick in later this year to shore up the Chinese economy.   © Reuters

“We estimate that an all-out trade war could shave as much as 1.5% off China’s GDP growth in the coming 12 months, all else being equal,” said Aidan Yao, a senior economist on emerging Asia at AXA Investment Managers Asia Limited.

On the whole, analysts remained pessimistic about the future of the trade dispute between the world’s two largest economies. Asked about the outlook for the conflict in the next 12 months, only five of the 16 analysts said it will calm down after the midterm elections in the U.S. in November, while six said the situation will remain unchanged and the rest forecast it will be even worse.

“Both the U.S. and China do not seem too interested in a deal. With Trump’s determination to correct the trade deficit and be hard on its growing rival China, we do expect him to go further and look into tariffs on the remaining $260 billion,” said Susan Joho, economist at Julius Baer.

Kenny Wen, wealth management strategist at Everbright Sun Hung Kai, said that even if tensions ease somewhat after the midterm elections, a battle could break out over technology and currencies, in which case the U.S. would take aim at China.

As for the effect of the U.S.-China trade war on the Chinese economy out of multiple options, many economists chose blows to exporters and the high-tech industries. Xie Yaxuan at China Merchants Securities expressed concern that the U.S.’s additional tariffs target the high-tech industry, which is China’s most important sector in the long run.

Many economists expect the PBOC will likely continue its accommodative monetary policy. Most economists predict that the PBOC will lower the reserve requirement ratio — the percentage of deposits that must be held by commercial banks over the next 12 months — by 0.25-0.5 percentage point several times.

“The PBOC is concerned about the growth outlook, thus efforts on deleveraging are sidelined and ‘economic stability’ has gained top priority,” said Sean Taylor, Asia-Pacific chief investment officer at DWS.