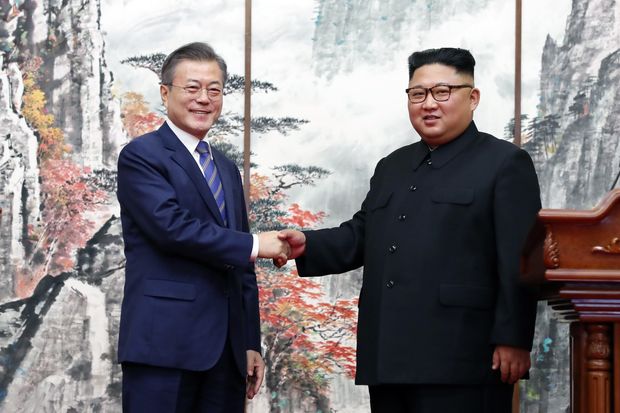 The good news from Pyongyang is that North Korea’s dictator says he still wants to give up his nuclear weapons. But Kim Jong Un’s summit Wednesday with South Korean President Moon Jae-in, the third this year, brought no significant progress toward that goal, notwithstanding the bonhomie.

Kim did pledge to dismantle a missile-test range, but he told Donald Trump the same thing in Singapore in June. This time, though, he will allow international experts to watch. The North Koreans are experts at selling the same horse twice, and it’s disappointing that a minor addition to an already symbolic concession is being hailed as a breakthrough when it was the only concrete result of the summit.

Some observers are excited that Kim dangled the possibility of dismantling his Yongbyon nuclear facility, which includes a reactor and centrifuges to produce material for warheads. But the North promised to do that during the Bush Administration and reneged.

And this time there’s a catch: The U.S. must first provide some unspecified benefits. The North’s demands are likely to include the loosening of United Nations and unilateral sanctions, as well as a formal declaration to end the Korean War. The North has made the same unrealistic demands since June, which is why talks with the U.S. are stalled.

Most important, Kim didn’t commit to provide the U.S. with an accounting of his nuclear facilities or a timetable for dismantling them. An accounting is the first crucial step because the world can’t monitor denuclearization if it doesn’t know the location of North Korea’s research facilities, bomb storage sites, missile launchers and warhead designers. This was Secretary of State Mike Pompeo’s first request after the Kim-Donald Trump summit in June, but the North has provided nothing.

President Moon hardly held Kim’s feet to the fire. He came to Pyongyang with an agenda to integrate the two Koreas economically and brought a delegation of 200 officials and business leaders to show his commitment. Those plans are advancing despite lack of progress toward denuclearization. The South sent materials and equipment across the demilitarized zone in violation of sanctions to build a liaison office that opened last week.

Wednesday’s joint declaration called for the two sides to hold a ground-breaking ceremony to reconnect rail and road links by the end of the year. They will also work on reopening the Mount Kumgang Tourist Region and Kaesong Industrial Zone, joint projects which provided the Kim regime with foreign currency until they were closed in 2008 and 2016 respectively.

Sanctions would need to be relaxed for these plans to come to fruition, so in effect the agreement is a call to let the North resume trading with the world. It’s no surprise that Kim won’t give an accounting of his nuclear program when the South is helping him pressure the U.S. to give up its sanctions leverage.

A presidential adviser on North Korea, Moon Chung-in, told the Journal last month that the South wants the U.S. and the North to offer mutual concessions to build trust. That echoes the North’s call for “phased and synchronous measures” by both sides, as opposed to the U.S. position of denuclearization first followed by rewards.

All of which makes it odd that President Trump responded with so much enthusiasm to Kim’s recitation of old promises. “Kim Jong Un has agreed to allow Nuclear inspections, subject to final negotiations, and to permanently dismantle a test site and launch pad in the presence of international experts,” Mr. Trump tweeted Wednesday. “In the meantime there will be no Rocket or Nuclear testing. Hero remains to continue being returned home to the United States. Also, North and South Korea will file a joint bid to host the 2032 Olympics. Very exciting!”

Sorry, the testing moratorium is useful, but it isn’t progress toward denuclearization. There is still a chance that Kim will agree to give up his weapons programs if the U.S. can hold on to enough of its leverage. Wednesday’s summit suggests that South Korea wants to shower Kim with carrots and put away the sticks. North Korea’s past behavior has shown that this is unlikely to succeed.