Mattis: America’s Goal Is Not War, but a Denuclearized North Korea 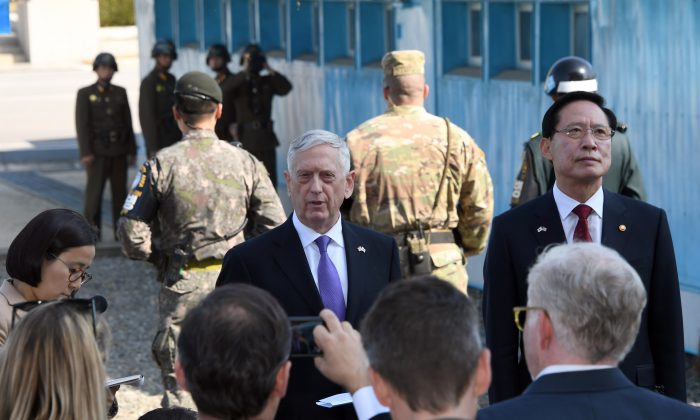 Secretary of Defence Jim Mattis (C) speaks to the media as South Korean Defence Minister Song Young-Moo (R) looks on during a visit to the Demilitarized Zone. North Korean soldiers can be seen in the background. (JUNG YEON-JE/AFP/Getty Images)
ShareTweetShareEmail

Defense Secretary Jim Mattis said that the United States is not seeking war, but rather a complete denuclearization of the Korean Peninsula.

His comments came as he visited the border between North and South Korea on Oct. 26.

Mattis also reassured South Korea that the United States would stand with its close ally in the face of threats from the North.

“We stand shoulder-to-shoulder with you, with your soldiers, and with your people in confronting the threats posed by the Kim Jong Un regime,” he said.

The North Korean regime has threatened multiple times in recent months to strike the United States, South Korea, and Japan with nuclear weapons.

The CIA believes that Pyongyang is just months away from solving engineering challenges that will allow it to launch a ballistic missile armed with a nuclear warhead.

“Should they ever use it, they will be faced with the strong might of the ROK-U.S. combined forces, and they will be met with a proportional and firm response,” said South Korean Minister of Defense Song Young-Moo while accompanying Mattis at the border.

In his own speech, Mattis drew a distinction between a free South Korea, and a suppressive North.

“To the south lies a vibrant country, a vibrant economy, a free country, and it’s underpinned by peace-loving members of a free society,” he said.

“Behind me to the north, an oppressive regime that shackles its people, denying their freedom, their welfare, and their human dignity in pursuit of nuclear weapons [and] the means of delivery, in order to threaten others with catastrophe.”

Since then, the North has been subjected to horrific communist rule. Its failed economic and social policies have brought the North Korean population great suffering. To date, much of North Korea has no, or limited access to, electricity, and millions have died of famine. Those with religious beliefs are subjected to extreme forms of torture.

South Korea, meanwhile, has become one of Asia’s most prosperous economies with its citizens enjoying one of the highest standards of living in the world.

Tensions have escalated on the Korean Peninsula after North Koreaconducted its sixth underground nuclear test in September.

President Donald Trump has repeatedly called on North Korea to abandon its nuclear weapons program. During a speech before the U.N. General Assembly in September, Trump said while the United States has great patience it could “totally destroy” North Korea if it is forced to defend itself or its allies.

Mattis has made similar statements himself, saying that while the United States does not seek to attack North Korea, it has means at its disposal to “completely annihilate” North Korea if absolutely necessary.

The United States currently has three aircraft carriers and their assorted missile-carrying vessels deployed in the Western Pacific Ocean.