After milking the fate of the planet for maximum drama, Donald Trump announced today that the U.S. would withdraw from the Paris climate accord. To reach this decision, the President had to dismiss decades’ worth of research by the country’s most prestigious scientific organizations. He needed to resist pleas from the U.S.’s staunchest allies; ignore appeals from many of its largest corporations, including ExxonMobil; and disregard the counsel of his Secretary of State. All this for, well, what? To shore up his base on the coal-hugging right?

“analysis: telling literally every other country in the world to fuck off will probably create problems down the road,” David Roberts, who blogs about climate policy for Vox, tweeted, as the news of the move began to leak out. But, if Trump’s decision is evidently wrongheaded, it’s also possible that it won’t make all that much difference. This is in part because the U.S. had already effectively exited the agreement. In part it’s because just about everybody outside the Trump Administration seems to understand that the U.S. is making a world-historical mistake.

“If Trump Dumps the Climate Accord, the U.S. Is the Loser” runs the headline of the cover story of next week’s Bloomberg Businessweek. Among the many reasons that Trump’s move makes no sense is that the Paris accord is a fundamentally weak agreement. Designed to avoid the need for approval by the U.S. Senate, it’s not even an official treaty. Under the accord, each country was left to devise its own commitment—or, as it is officially known, “nationally determined contribution.” In March, the Administration made it clear that it had no intention of fulfilling the U.S.’s commitment, which was to reduce the country’s carbon-dioxide emissions by at least twenty-six per cent by 2025 (a figure that relies on a baseline from 2005). The White House did this by rescinding—or, more accurately, indicating its desire to rescind—the two sets of Obama-era regulations upon which the commitment was based: a set of stricter auto-efficiency standards and a series of rules governing emissions from power plants.

Even under these rules, it would have been a stretch for the U.S. to meet its Paris “contribution”; without them, meeting the contribution has become, for all intents and purposes, impossible. (Instead of declining, the U.S.’s emissions are now predicted to remain steady through 2030.) But, since the country’s commitment was, essentially, voluntary, the U.S. could have remained a party to the Paris accord while at the same time ignoring the agreement’s terms. (In fact, technically, it will remain a party to the accord, as the process of formally withdrawing will take years.)

Many in the climate-policy world argued that this course was preferable and that, despite the Trump Administration’s atrocious behavior, it would be best to keep the U.S. at the negotiating table. Others worried that Washington’s bad manners might be contagious. “A rogue US can cause more damage inside rather than outside the agreement” is how Luke Kemp, a climate-policy expert at Australian National University, put it recently, in the journal Nature Climate Change. Trump’s decision has obviously rendered this debate moot. By withdrawing, the U.S. will join a select group of non-participants. Only two other countries, Syria and Nicaragua, are not part of the Paris agreement—Nicaragua because it objected to the voluntary nature of the commitments.

One way to think about the Paris accord is as a diplomatic version of “Stone Soup.” In the folktale, reluctant villagers contribute tidbits to a collective pot, and in the end everyone gets a meal. The story turns on a trick that overcomes the villagers’ reflexive stinginess; by the logic of the scheme, the working-out of the illusion transforms it into reality.

In the climate treaty, instead of soup, the objective is a radically transformed energy system. If everyone believes that the transformation is going to happen (“everyone,” in this case, meaning the world’s major energy producers and the banks that finance them), then it will, in fact, take place: the illusion has the power to become self-fulfilling. This is the promise of Paris—and, of course, the peril. The dynamic can run in either direction.

The U.S.’s withdrawal could prompt other countries to reconsider their contributions. Or it could have the opposite effect. The Trump Administration is leaving the energy technologies of the future to other countries to develop, and many nations see an economic opportunity. As the headline of a recent post on Foreign Policy’s Web site put it,“If Trump Dumps the Paris Accord, China Will Rule the Energy Future.” It is telling that several of the U.S.’s largest tech companies, including Apple, Google, Microsoft, and Intel, signed an open letter to Trump, urging him to “keep the United States in the Paris Agreement.” The letter states, “By expanding markets for innovative clean technologies, the agreement generates jobs and economic growth.” On Tuesday, Apple’s chief executive, Tim Cook, reportedly put in a call to the President, urging him to remain in the agreement.

In another open letter to the President, which ran as a full-page ad in the Wall Street Journal, the heads of thirty other mammoth companies, including 3M, Cargill, Bank of America, and Morgan Stanley, wrote to express their “strong support for the United States remaining in the Paris Climate Agreement.” The C.E.O.s said that they were concerned about the “strong potential for negative trade implications if the United States exits from the Paris Agreement.”

Many commentators have suggested that the U.S., in withdrawing from Paris, is ceding its leadership role in the world. But the sad fact is that the U.S. has never been a leader in addressing climate change; this is one of the main reasons that the Paris accord is so weak. The U.S. has only been a leader in producing climate change. (On an annual basis, America is now the world’s second-greatest carbon emitter, behind China, but on an aggregate basis it’s responsible for more of the excess CO2 in the atmosphere than any other country.) When Barack Obama helped forge the Paris accord, he was trying to make up for decades of American inaction. Trump has now nullified that effort. The just result would be that it is the U.S. economy that ends up suffering. 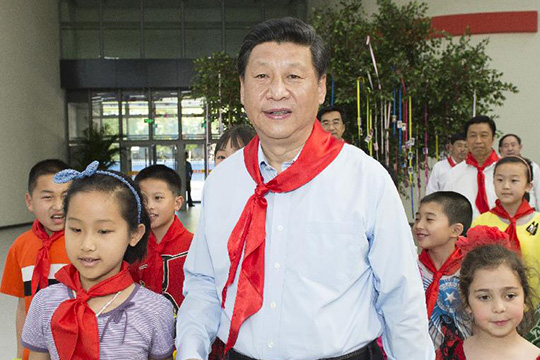 On June 1, while Donald Trump was busy announcing his decision to pull out of the global pact to reduce carbon emissions signed in Paris in 2015, the Party newspaper People’s Daily posted the following to Facebook:

Climate change is a worldwide challenge and no nation can stay away. China will fulfill the Paris Climate Accord, Chinese Foreign Ministry spokesperson Hua Chunying reassured the world, as the U.S. President Donald J. Trump announced on Thursday that the U.S. will start [a] years-long process to withdraw from [the] Paris Climate Agreement.

Trump explicitly referred to China in his speech, complaining of unfair treatment in the Agreement, and saying that it puts the U.S. at a “very, very big economic disadvantage.”

Trump’s decision highlights an extraordinary change in Chinese political culture: How did China come to embrace the fight against climate change despite an active domestic group of climate change deniers? Arguments questioning the science behind climate change and saying that it was a Western plot to keep China down were mainstream just a few years ago — Foreign Policy traces the history of Chinese climate change denial and how the Party “embraced climate science to become a green-energy powerhouse.”

Meanwhile, in the Huffington Post, Matt Sheehan looks at efforts from one state to ramp up cooperation with Beijing, reporting that “California governor Jerry Brown is getting ready to take on the role of America’s de facto climate ambassador,” and is about to take a weeklong trip to China, where he will “meet with Chinese leaders and members of the global Under2 Coalition, an ad hoc alliance of countries, states and municipalities committed to taking action to keep global temperature rises within two degrees of pre-industrial averages.”

If you’re interested in all the things that connect China and California, Sheehan writes the useful Chinafornia newsletter. He also recently wrote about Rex Parris, mayor of Lancaster, California, who is betting on Chinese investors saving his town, which is currently best known for meth labs and neo-Nazis.